Late last week, we provided an update on overall plans and some details about the conversion of the former TVA Federal Credit Union Building in Downtown Knoxville into the Cocoon STEMSTM Innovation Center. Today, we’re back with additional details about the first floor where so much of the public-facing activities will occur.

The project, led by Katherine Bazemore, Founder and Managing Shareholder of Cocoon Resources Inc., will turn the vacant three-story building and its basement into a combination R&D facility for one of Cocoon Resources’ portfolio companies, an incubator, a corporate headquarters and, most important, a facility to inspire K-12 students in the region to pursue science, technology, engineering, mathematics and sports careers.

Bazemore brings an exuberant personality and a passion for the life sciences to the project. As such, her vision for the exterior of the building at the corner of Gay Street and the currently named Wall Avenue that she hopes will become Wall Street and the first floor reflect that passion. In our earlier article (click here), we described the exterior features that include flags from countries that are leaders in start-ups per capita, a large backlit sign over the new Gay Street entrance and, if codes permit, large screens that would broadcast programming occurring within the STEMSTM Center.

“All of the columns will be electronically controlled as to the visuals, whether they be solid colors or information we desire to be presented,” Bazemore explains. “The balance of all the glass/walls is being utilized as desired to present the  information that would normally be on a screen for a PowerPoint wrapped around the entire main floor.” 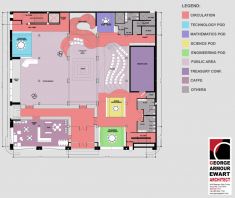 This schematic (here’s a PDF version that is larger – Cocoon STEMS First Floor Schematic) from George Armour Ewart Architect provides greater details about the expected vibrancy that will occur on the main floor with many different pods. Additional depictions are available at the end of this post.

There will be entrances from both Gay Street and Wall Avenue and a coffee shop included but also positioned so it does not detract from the visual impact when individuals enter the primary first floor space.

The majority of the floor that totals about 14,000 square feet is designed to have a very open feel and allow for very flexible programming. Designated as the Atrium, it will include what Bazemore calls the “Talking STEMSTM Stage.”

“It will be hanging and will descend when there is a program,” she says. “The stage for these programs will feature accomplished speakers from around the globe for all of the areas of STEMSTM as well as corporate finance leaders and successful entrepreneurs.” All of those support Bazemore’s goal of having the Center serve as a major destination point to showcase STEMSTM opportunities for K-12 students and inspire them for careers in those areas.

Space to the left of the stage area is allocated for poster sessions and other types of educational and networking activities. “We will be able to feature the results of innovation underway in the building and the efforts of our interns,” Bazemore explains.

To the right is an area that can be configured easily for lectures. Beyond that area is space that is designated as the “Treasure Room for Innovation.” It is the area that housed the credit union’s vault and safety deposit boxes.

Bazemore says the “Treasure Room” will represent all of the areas reflected by the STEMSTM acronym. In addition, the schematic shows four separate brainstorming “pods” areas for science, technology, engineering and mathematics.

As described in the previously referenced teknovation.biz article from last week, the basement of the building will house R&D space for the BreathKeysTM brand of Volatile Analysis Corporation, one of Cocoon Resources’ portfolio companies. The second and third floors will house an incubator, corporate apartments, and the headquarters for Cocoon Resources. The roof will be used as an open air space for further networking events.

“There is a separate entrance for going to the apartments and a new elevator will be installed to go to the patio area,” Bazemore said. 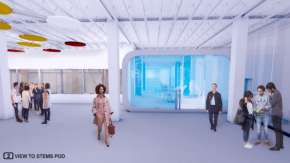 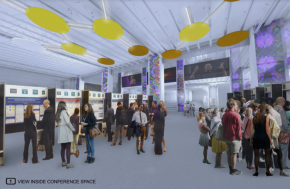 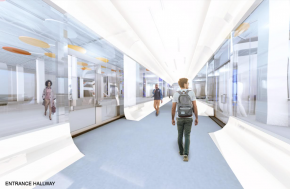