Additional details, including an updated name, have been announced for the former TVA Federal Credit Union Building in downtown Knoxville where Cocoon Resources Inc. will locate its corporate headquarters and also the home for the BreathKeysTM brand of Volatile Analysis Corporation, one of its portfolio companies.

In a conversation earlier this week with Katherine Bazemore, Founder and Managing Shareholder, we learned of the new name – Cocoon STEMSTM Innovation Center, saw the first publicly available renderings of the exterior options (see below), and heard about the updated timetable for the renovation of the three-story building that also includes a basement.

As noted in our July 1 teknovation.biz article, STEM education (science, technology, engineering, and mathematics) was always a key component of Bazemore’s vision for the Center, so you can imagine her excitement now that the facility will be located in the shadows of the former TVA East Tower that will soon house the headquarters of the University of Tennessee System and Knox County Schools.

The updated name reflects her belief that STEMS – the second “S” is a reference to sports – brings that all-important aspect of team play and what she calls “life and leadership skills” integrated into what is fast becoming a converging environment of science, technology, engineering, and mathematics.

“It’s more reflective of what investments we are interested in versus just science,” Bazemore said, adding, “We want to connect to all the area STEMS educational initiatives and believe the facility is a great conduit to that objective.”

As far as the timetable, she says the plan is to close on the building September 30 and start construction on October 1. The first two priorities for renovation are the exterior, something that will provide a very visible signature for the Center, and the basement which will house the BreathKeysTM research and development facility where several million dollars of new equipment will be located.

“I’ve been assured that we will use a 12-month fast track project for the full construction,” Bazemore said, explaining that Cocoon Resources is already in the process of vetting firms that could become occupants of the second floor that is designated as an incubator. Most of that space will be used to grow start-ups that are part of the Cocoon Resources portfolio, but some tenants could be companies that support those portfolio ventures in a variety of ways.

In addition to the research facility, corporate headquarters for Cocoon Resources, and the incubator, the Center will also include four apartments that would be used for those visiting – distinguished speakers, interns, or corporate executives from other locations – and an open rooftop area.

From the first time that we talked with Bazemore, a Carson-Newman University graduate, it was clear that she wanted to have a big impact on her new hometown and make a major statement with the Center, both in terms of how it looks but, more important, what it offers. That vision is clearly reflected in the plans for the exterior and also the main floor.

The main floor is being designed to host what Bazemore calls “Talking STEMSTM Programs” that could be broadcast on screens on the Gay Street side of the building. In addition, it will also feature conference rooms, a bakery, and window space for exhibits.

Pictured below are the Gay Street exterior as it appears today and two options, one with a large screen where presentations occurring inside the Center as part of the “Talking STEMSTM Program” could be shown and one without that option. Final decisions will be made after further discussions with City of Knoxville officials. The fourth visual is a depiction of activity at the building’s front entrance.

Bazemore noted the symbolism of the flags on the Gay Street side. “They will be of nations or countries that are leaders in start-ups per capita,” she says. “These flags will rotate yearly based on previous year data,” but either the City of Knoxville or State of Tennessee flag will be a permanent fixture.

“If you notice, our building will have a large sign over the new Gay Street entrance,” Bazemore adds. “It will be backlit and include an extensive mathematical equation.”

The Wall Avenue side will also have flags over the entrance near Market Square. Those flags will represent countries and/or cities that are financial capital leaders globally. There are efforts underway to change the name of Wall Avenue to Wall Street, utilizing the name recognition for part of the global effort to build Knoxville as a major capital center of influence.

And, for good measure, Knoxville is only the beginning point for Cocoon Resources’ new STEMS Innovation Center strategy. “We expect this to be the first of many Innovation Centers in key cities following the Knoxville model,” Bazemore says, but quickly adds, “Knoxville will of course be the only one housing our headquarters.” 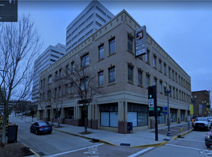 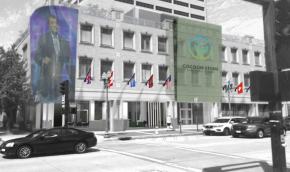 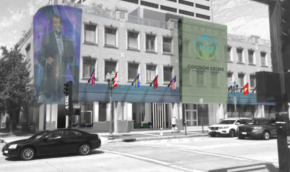 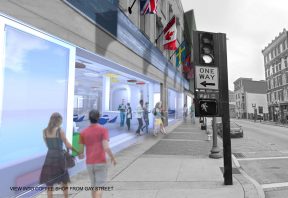