A lot is changing in Downtown Knoxville and other areas nearby. While the baseball stadium project may be top of mind for most, other projects on Cumberland Avenue, the River Breeze Event Center out east, and housing developments are altering the very fabric of downtown.

All these projects are likely to bring more people to the area, whether for special events or to live in the hustle and bustle of Knoxville. At teknovation.biz, we decided to speak with various leaders in the area to see what these changes might mean for Knoxville, as well as for businesses there.

Much of the increase in traffic downtown is due to work both the city government and other partners have put in to improve business and even the aesthetics in the area. Alan Sims, otherwise known as the Knoxville Urban Guy, has been covering the area in his blog Inside of Knoxville since 2010 and has seen quite a bit of this growth firsthand.

“At the time I moved downtown, there was a lot of base work being done to prepare for the possibility of growth,” he said. “That decade of work led to what happened between 2010 and 2020, which was huge.

Prior to those efforts, Sims said he would often see commenters on his articles stating they would never go to the downtown area. Michele Hummel, Executive Director of the Downtown Knoxville Alliance, agreed, joking that you could “literally roll a bowling ball down Gay Street and not hit anyone after 6 o’clock.”

Rick Emmett, the Downtown Coordinator for the City of Knoxville, said streetscape projects on Jackson Avenue, in the Old City, and Market Square helped bring people back downtown. Streetscaping and more businesses have added to the vibrancy of downtown. As far as getting the ball rolling on new developments, he said “we’ve known we needed to do construction.” 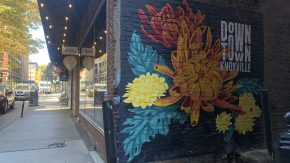 One of many downtown murals.

Part of the construction includes the city working with 100-year-old infrastructure in some places, Emmett said. More people downtown mean there will likely be increased pedestrian use. Emmett said it’s important for Knoxville to be mindful of which roadways see the most traffic and where that will be combined with more pedestrians in the area. Traffic calming may need to be added. Emmett also said the city is trying to improve sidewalks.

The increase in pedestrian traffic will be good for not only the stadium area, but all of Knoxville, Emmett said. It will bring people from other communities downtown. “

Linking back to safety, the Alliance worked with Visit Knoxville, Knox County, and City of Knoxville leaders to start the Ambassadors program. Volunteers in green shirts are scattered throughout downtown to help people find things they need, answer questions, and help with some safety tasks. Hummel said the program has been a success so far and the Alliance is getting ready to evaluate it.

In addition to infrastructure changes from the city, Hummel said events have helped pull people downtown. This is something the Alliance aims to keep working on, she added, providing a mix of family-friendly and other events to draw people to the area.

These days, Sims says the downtown naysayers on Inside of Knoxville are all but gone, and it’s now a more bustling area.

Check back next Saturday in the Weekend Edition as we look at how downtown upgrades are attracting more people, while the city is also working to tackle the need for more affordable housing in that area.