INVESTOR OUTLOOK PART 2: Advice then and now for portfolio companies

Persistence pays-off, and that was certainly the case with the winner of this year’s pitch competition, as determined by a panel of judges, during Knoxville’s annual “Startup Day.”

490 BioTech, which we first spotlighted in this May 2012 teknovation.biz article, started with a license from the University of Tennessee (UT) Research Foundation and is now on the cusp of having a product ready for commercial deployment. The company’s light-emitting human cell lines are used to accelerate the pace of new drug discovery and move drugs more rapidly and more effectively towards Phase I human testing with a reduced overall cost.

“We’re ready to move out of R&D and into sales,” Dan Close, Co-Founder and Chief Executive Officer, said during Friday’s awards event. “Our product provides continuous information about a drug’s effect on human health so pharmaceutical companies can operate more efficiently.”

By capturing first place, Close and the 490 BioTech team received a $7,000 cash prize that will be used to further develop the business.

Two other awards were presented during the virtual event that brought the 2020 edition of “Innov865 Week” to a conclusion. The “Innov865 Crowd Favorite” prize and $3,000 was presented by Truist to Erica Grant of Quantum Lock Technologies LLC, and the first-ever “Innov865 Impact Award” was presented by Verizon to Peter Tsai, the former UT researcher who developed the now well-known and valued N95 mask material.

Quantum Lock creates random, untraceable combinations for locks that prevent hackers from doing things such as creating a master key for hotel rooms, among other safeguards. Later plans for Quantum Lock’s technology include securing the energy grid, hospitals, homes, smartphones and personal security. 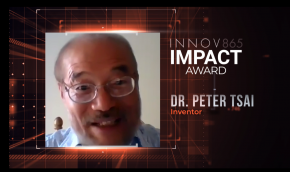 Tsai, who retired two years ago but returned to help Oak Ridge National Laboratory (ORNL), used a method called electrostatic charging to develop the N95 mask material, which filters out 95 percent of particles from air that wearers breathe through the mask. Front-line healthcare workers and others use the N95 mask as part of the essential personal protective equipment they need during the COVID-19 pandemic.

During Friday’s event, Tsai discussed his work in a fireside chat with fellow panelist Lonnie Love, ORNL Group Leader for Manufacturing Systems Research who was Lead Scientist on the COVID-19 Response Team. Moderator for the panel was Jon Sheiber, a Senior Editor at TechCrunch.

“Peter is very humble, gracious and open,” Love said of the long-time researcher who is also a neighbor. When COVID-19 hit and ORNL ramped-up efforts to be responsive, “Peter became my target number one to help,” Love said. “We would not have been able to have scaled (our efforts) without Peter’s help. He’s opened-up a whole new opportunity for personal protective equipment. It’s a baseline technology that we can add to.”

Two of the three judges for “Startup Day” – Karen LeVert of Pappas Capital and Sue Malone of Strategies for Small Business – returned virtually on Friday to participate in the announcement of 490 BioTech. Both agreed the competition was tough, so making the final selection was challenging.

In the end, LeVert said the decision was based on the company that had made the most traction. She also noted the amount of grant funding and, therefore, undiluted capital that 490 BioTech had secured.