Victor Brown is obviously leaving no stone unturned in his journey to accelerate the growth of his start-up named Xcellent Life, the cloud-based, artificial intelligence-powered platform to help individuals live a healthier life.

As noted in this recent teknovation.biz post, the two-time alum of accelerator programs operated by Chattanooga’s CO.LAB was accepted into the “Velocity Accelerator” operated out of Innovation Depot in Birmingham. That announcement came about a week before Brown pitched late yesterday in one of the final rounds for the “Conscious Ventures Labs (CVL) Accelerator.”

Over five 90-minute sessions that started Monday and end on Friday, Xcellent Life and the other 41 participants in Cohort 6 pitched their companies. The event is called “Showcase Week,” culminating a program that began last October with start-ups from 16 states and 13 countries. 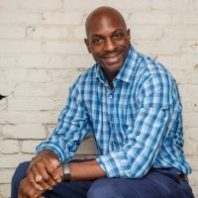 “The program in Baltimore is run by Jeff Cherry, an experienced VC that makes investments based on the thesis that companies that have a purpose of good ultimately perform better and have higher returns,” Brown (pictured here) told us in an email. “It is called conscious capitalism. The program is designed to help each Founder understand their true purpose in life, describe the core purpose of their company in a way that is investable, and put the structure around the companies that cater to growth.”

The multi-month programming involved: (1) mastering the tenets of conscious capitalism, (2) fine-tuning business models; and (3) making extensive progress on and in their businesses using the CVL powered by FounderTrac platform.

In brief comments yesterday, Cherry highlighted three goals for the Accelerator: (1) reinforce his belief that capitalism can be used as a force for good; (2) invest in start-ups that are addressing urban problems; and (3) create prosperity in places it has not occurred before and in minority Founders who have received less than three percent of investment capital recently.

Brown said investment team at CVL, part of a larger organization named SHIFT, has spent time getting to know the 42 Founders and truly understand what makes them tick. At the end of the program, at least 10 of the companies are expected to receive at least $100,000 in investment, and he is optimistic that Xcellent Life will be one.

Meanwhile, he’s actively involved in the “Velocity Accelerator” program, now in its fifth year. His start-up was one of eight selected from more than 50 applicants. Each of the eight receives $50,000 in capital, along with resources and mentoring in order to grow their operations quickly.