The second week of the first-ever “36|86 Entrepreneurship Festival,” organized by Launch Tennessee, begins at 10 a.m. EDT today, and a number of East Tennesseans have roles on the program throughout the next five days.

As week one concluded on Friday, one of the highlights of Day 5 was a conversation with well-known Nashville Entrepreneur Marcus Whitney. His official resume includes being a Founder and Chief Executive Officer of Health:Further, a strategic advisory firm in the healthcare sector, and a Founding Partner of Jumpstart Health Investors. It also includes being the author of a new book titled Create and Orchestrate: The Path to Claiming Your Creative Power from an Unlikely Entrepreneur.

During a very candid fireside chat with Jacob Jones, Creative Director and Content Strategist at Jonestown Productions LLC, Whitney shared portions of his journey from being a college dropout who waited tables to his current success in Nashville. The challenges he faced and overcame, as detailed on this webpage, included alcohol abuse, divorce and dysfunctional relationships, failed companies, poor eating habits, physical inactivity, bad credit, self-doubt, isolation, and prejudice. 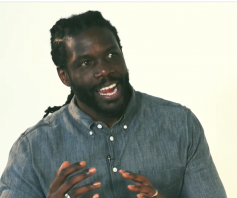 “It (writing the book) took way longer than I thought it would take,” Whitney told Jones. In fact, he started on it nearly six years ago and really got serious about his writing in late 2018. The brief experience that he related at that point in the discussion was one of the more powerful moments of the conversation, and it mirrored the importance of transparency, a key message that Whitney consistently repeated.

“I decided to become sober the day after Thanksgiving (2018),” he said, retreating a couple of weeks later to a cabin some two hours from Nashville where he wrote for as many as 14 hours a day over the next week. “It was me, a laptop and a pot of coffee. I could never have done this before I was sober. My throughput and ability to execute is so much higher.”

Months later, the 262-page book was published and is described as demystifying “much of what keeps people from pursuing entrepreneurship and explains why it’s the only vocation that allows you to control your time by using your creativity. When you control your time, you can claim your full power by matching up what you’re great at with the problems you see in the world.”

What has the reaction been?

“The feedback that I’ve gotten makes me feel like I delivered the book I promised,” Whitney said. “I want people to learn from failures but also be transparent.”

During the fireside chat, he shared the evolution of his thinking and himself as a person. Whitney and Jones met in 2013 when the latter asked for a meeting to seek his advice on a new venture and became friends over the ensuing period.

“I was trying to teach so I could learn,” Whitney said of the reason that he took so many meeting requests like the one from Jones. “I became aware entrepreneurship was something you could study,” citing writings by individuals like Steve Blank.

When Whitney decided he wanted to take the lessons he had learned and share them in a book, he says he quickly learned an important lesson. “I don’t know how to write. Do I have what it takes to write a book?”

Noting that “entrepreneurship is a journey,” Whitney said those who pursue it should understand that “the universe responds to actions. The first level is taking action, then the next step is to take the right action.”