Tomorrow is another one of those milestone days in the career of Lindsey Cox as she returns home, so to speak, as Chief Executive Officer (CEO) of Launch Tennessee (LaunchTN).

The six-year veteran of the statewide entrepreneur-focused organization left her role as Director of Operations and Government Affairs in 2019 to join the U.S. Economic Development Administration (EDA) in Washington. There, she served as Program Manager for the agency’s “Build to Scale” program before returning to the Volunteer State about 15 months ago as CEO of CO.LAB, the Chattanooga component of LaunchTN’s statewide entrepreneur network. 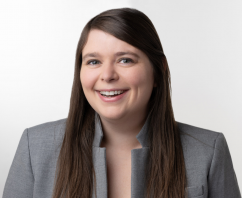 “It’s been great to reengage with and meet the LaunchTN team,” Cox (pictured right) says. “There’s great energy and enthusiasm.”

For the past several months, Cox has been gradually transitioning into the full-time role while also continuing to lead CO.LAB. That dual duty ends tomorrow, and CO.LAB announced on June 16 (see teknovation.biz article here) that Tasia Malakasis would succeed Cox at its CEO.

As she prepares to take the reins of LaunchTN, she quickly notes that her focus is not on a simple replay of the past. “The mission has not changed but the ecosystem has,” Cox says, underscoring the point by noting that only two members of the staff remain from her days. They are Khrys Hatch, Capital Formation Manager, and Ashlin Smith, Network and Talent Manager.

Perhaps the best example of how Cox sees LaunchTN going forward is plans for the 3686 conference. As highlighted in the announcement of her appointment, Cox served as Director of LaunchTN’s flagship conference in 2018 and 2019, leading a push to bring dozens of compelling speakers and a wealth of content to the event, marking its transition to a highly anticipated, nationally recognized, multi-day meeting for start-ups and investors in Tennessee and beyond. The event ran over the better part of a week both years and was offered entirely virtually over a two-week period in 2020 before being cancelled in 2021.

“We’re taking it back to its roots as an investor and entrepreneurship event in 2022,” Cox says, teasing that “some exciting announcements will be made in the coming weeks.”

Regular readers of teknovation.biz should recall that LaunchTN will play a major role on behalf of state government in managing a significant portion of Tennessee’s allocation of funding under version 2 of the federal “State Small Business Credit Initiative” (SSBCI 2.0). As described on the website of the U.S. Department of the Treasury, the initiative is designed to “empower small businesses to access capital needed to invest in job-creating opportunities as the country emerges from the pandemic. The funds will also support recipient jurisdictions in promoting American entrepreneurship and democratizing access to startup capital across the country, including in underserved communities.”

In preparation for managing an expected nearly $70 million of Tennessee’s anticipated $110 million allocation, Cox recently announced (see teknovation.biz article here) the hiring of Monique Villa, a well-known venture capitalist, as LaunchTN’s Chief Investment Officer. She relocated from Los Angeles to Nashville five years ago, helped launch the “Build in SE” initiative, and served until recently as a full-time investor and Entrepreneur-in-Residence with Mucker Capital.

“Monique is really representative of what we are trying to do on the investment front,” Cox said. “She will be the primary lead on SSBCI 2.0.”

The State is still awaiting approval of its plan for use of the federal funds.

For the past 10 months, Abby Trotter, a Partner in Hall Strategies and also Executive Director of both Life Science Tennessee and the BioTN Foundation, has served as Interim CEO of LaunchTN. Saying that “Abby has done such a good job of stabilizing the ship . . . and bringing and maintaining excitement,” Cox also praised her for securing additional funding in the state’s 2022-23 budget for the network partners that LaunchTN supports.

Since starting her transition role, Cox has also helped develop and submit an EDA “Build to Scale” proposal that could lead to the establishment of industry networks that would complement the existing mentor networks. Two potential verticals that she identified are in FinTech and consumer products that use advanced manufacturing techniques.

“We will know in the fall if we won an award,” Cox said.

And, last but not least, there’s the matter of talent . . . educating Tennesseans, retaining individuals, and attracting new people to the Volunteer State. As Cox considers the important role that LaunchTN can play, she is examining ways to expand and enhance the organization’s existing internship program

It’s an exciting time for the graduate of Tennessee Tech University who now is in the role that has been her longtime goal.