What started as a desire to build a tiny house in California sparked an interest in sustainable hemp-based building materials. That interest helped lead Tommy Gibbons to co-found Hempitecture, a company that will manufacture HempWool® for building insulation here in the United States.

Gibbons, who is Co-Founder and Chief Operating Officer of Hempitecture, recently joined Cohort 5 of the “Innovation Crossroads” program through Oak Ridge National Laboratory (ORNL) and the Department of Energy. Gibbons will specifically be working with the Building Technologies Office and will be working at the Building Technologies Research and Integration Center at ORNL. 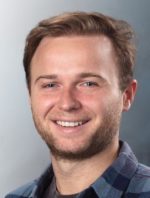 Before founding Hempitecture, Gibbons got his start working in investment banking at Goldman Sachs in New York after graduating with a degree in Public Policy from Princeton University. But Gibbons said he realized the job wasn’t for him.

“I didn’t feel like I was making as much of a difference as I potentially could,” he said. “So, I ditched that and got very interested in start-ups.”

After teaching himself software programming and moving to San Francisco, Gibbons began working for a start-up called Piper which makes do-it-yourself kits for elementary-aged children to learn more about building and programming computers.

While living in California, Gibbons attended a workshop in Oregon to learn more about how to build a tiny house for himself. The presenter mentioned a material called hempcrete, which mixes hemp and lime to make a fire-proof insulating building material. People were hooked, and so was Gibbons.

“The audience was so enamored with the material that they wouldn’t continue with the presentation—they just kept peppering him with questions about hempcrete,” he said.

That was when Gibbons reached out to Matthew Mead, an old high school classmate, who had already been working in the hemp building space. Gibbons said he helped fund a Kickstarter campaign Mead launched to build the first public-use hempcrete building in Idaho. The production of hemp was legalized in the 2018 Farm Bill.

Gibbons then moved to Bellingham, WA to help Mead, now Co-Founder and Chief Executive Officer of Hempitecture, build the largest hemp house in the U.S. Hempitecture is now based in Idaho, but Gibbons will relocate to Knoxville in October for the “Innovation Crossroads” program.

Two years ago, Gibbons said Hempitecture moved away from hempcrete as a building material because it is not well-suited to how construction is done here in the U.S. Instead, the company pivoted its model to distributing hemp batt insulation from an international manufacturing partner. Hempitecture opened a distribution center in Salt Lake City and more recently has opened a second one here in Knoxville.

“Currently manufacturing it abroad, importing it, and then warehousing it is driving up costs to our customers. So is shipping and lead time,” he said. “It’s going to make a lot of sense if we can produce it ourselves in Idaho with American grown hemp.”

Hempitecture launched a Wefunder campaign to help cover the expenses of manufacturing its HempWool® insulation product. As of last weekend, the campaign has raised more than $3.5 million, of which Hempitecture plans to take $2.5 million. The company is also in talks with banks and the U.S. Small Business Administration to debt finance the equipment.

Gibbons said part of his work at “Innovation Crossroads” will be to develop and commercialize Hempitecture’s product roadmap. Currently, the market for manufacturing hemp building materials in the U.S. is small but growing, Gibbons said. Many builders are importing the products from Canada, France, or Belgium. He said he will be doing research at the lab to make improvements on Hempitecture’s product compared to what’s on the market in Europe.

In addition to the storage warehouse already located here in Knoxville, Gibbons said Hempitecture is looking into the possibility of building a second manufacturing facility here. This will be a counter footprint to the location in the Pacific Northwest and connects the company to the hemp growers here in Tennessee and Kentucky.

He added that another goal for Hempitecture is to better understand the carbon footprint of building materials. Gibbons said they eventually hope to add Environmental Product Declarations to Hempitecture materials. He described the declarations as “nutrition labels for building products.”

Besides insulation, Gibbons said they are looking into other building material replacements such as drywall and plywood.

“All these different components that are part of a building structure—on virtually 95 percent of homes built in the United States—could feasibly have hemp-based substitutes,” Gibbons said.