We heard words like “awesome” and “cool” when we caught-up Wednesday afternoon with the seven autoXLR8R teams during the midpoint of their week-long visit to the Oak Ridge-Knoxville region.

“It was pretty awesome,” Andrew Robinson, a student working with New Hybrid Technologies, said of the briefing they had just received at Local Motors’ new storefront on Market Square. “Pretty cool” was the way that Chad Sisk, another of the students, described the Local Motors business strategy.

We have posted a number of articles on the Arizona-based start-up that plans to add to its local presence by opening a micro-factory at a later date. For now, the region is an ideal location for Local Motors’ collaborations with Oak Ridge National Laboratory’s (ORNL) Manufacturing Demonstration Facility (MDF), Cincinnati Inc., and General Electric.

We also had a chance to chat briefly with David Johnson, one of the Founders of New Hybrid Technologies. The Knoxville-based start-up has 12 patents pending on an approach that replaces a torque converter to generate electricity and provide auxiliary power for hybrid and electric vehicles.

“So much of manufacturing is going in this direction . . . micro . . . on demand,” Johnson said of the Local Motors approach. He has been in the transmission business for 30 years and currently has two transmission repair shops in addition to his sideline as an inventor and entrepreneur.

On Tuesday, the teams visited ORNL’s Carbon Fiber Technology Facility as well as the MDF.

After their briefing at Local Motors, the autoXLR8R teams heard from a couple of successful Knoxville entrepreneurs who shared their lessons learned.

The group ends its Oak Ridge-Knoxville visit on Friday. On tap in July are two different visits to Clemson University’s International Center for Automotive Research and automotive companies in the state.

The 2014 autoXLR8R program wraps-up with “Demo Day” on August 12 in Spring Hill.

BELOW: Parker Frost of Gigmark Interactive Media shares his journey as an entrepreneur with the autoXLR8R teams on Wednesday afternoon at the Knoxville Entrepreneur Center. 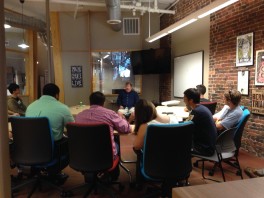