The wait is almost over.

If everything adheres to the schedule, the newest location of Nashville-based e|spaces will open at the first of August in a new, three-story building in the Western Plaza Center in Knoxville’s Bearden community. The official address is 4315 Kingston Pike.

It will be the city’s largest working community for professionals – from those needing just a mailing address to those wanting an occasional workspace or conference room as well as those who need a walled office for one to four people.

“We have 13,000 square feet available,” said Jon Pirtle, e|spaces President. The facility occupies the entire second floor of the three-story building (see exterior picture at right) and features 46 private offices, four conference rooms that accommodate from six to 20 people, and up to 75 “hot desk” spaces with appropriate social distancing.

Pirtle gave us a tour of the space on Wednesday. Finishing touches, mostly to the common areas and break space, are all that remains. Pictured at right is a typical one-person private office. In the pictures below are several various of the “hot desk” configurations including one that also shows one of the smaller conference rooms and an adjacent private office. Readers will note the Western Plaza shops in the background beyond the windows.

“We will have free breakfast for members on Monday and a weekly happy hour,” Pirtle said. The continuous coffee pot will be fed by Maryville-based Vienna Coffee. There will also be the customary amenities like sodas, printing and Wi-Fi plus parking in front of the building. There are also restaurants in or near Western Plaza.

Those interested in learning more about e|spaces can contact the Pirtle by emailing him at jonpirtle@espaces.com or calling him at 615/414-5814.

We have followed the development since we first learned of the plans to open the Knoxville location a year ago during a meeting with Crom Carmichael, a well-known Nashville entrepreneur and investor in various ventures including e|spaces. He gave us a tour of the facility in Downtown Franklin, one of three currently open in Middle Tennessee with one more opening soon in the Green Hills area. There are also locations in Chattanooga and Orlando.

These pictures from the Franklin facility will give you an idea about the ways in which the common spaces will be finished in Knoxville. The picture on the left is the break area, while the one on the right is the work area. 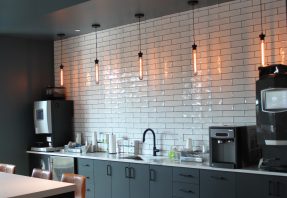 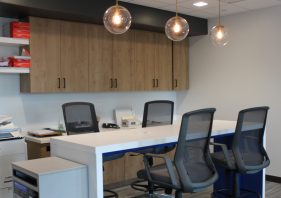