We have posted several articles recently about the move of people out of big cities like San Francisco, Chicago and New York and into the Volunteer State. There was the two-part series (Part 1 and Part 2) with Maribel Koella and several others like a recent report from U-Haul citing Tennessee as the top destination for one-way rentals.

During a virtual event yesterday, there was a fascinating discussion featuring Brian Moyer, President and Chief Executive Officer of the Greater Nashville Technology Council, and Jennifer Stojkovic, Executive Director of sf.citi, the tech trade association of San Francisco.

She introduced the virtual session with a simple but provocative question: “Does Nashville have what it takes to be the next SFO?” If you follow some of the key data that Stojkovic (pictured here) outlined, you would say it suggests the answer is “yes.”

Sf.citi has a dashboard (click here) where it tracks the exodus.

By comparison, Stojkovic cited these data points about Music City: (1) Nashville has experienced a 36 percent tech job growth rate compared to a national rate of 23 percent; and (2) the cost of living, not surprising to our readers, is 3.3 percent below the national average. All those factors make Nashville specifically and the Volunteer State generally attractive to those who can work from anywhere. 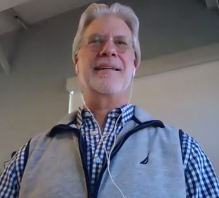 Moyer (pictured here) talked about the momentum that was already underway in the state’s Capital City before the pandemic. “Admittedly we are a smaller city but we have one of the fastest growing tech sectors,” he said, talking about earlier wins and the announcement by Amazon in 2018, followed quickly by one from AllianceBernstein, that really put Nashville on the radar big time.

Other factors that have helped polish the city’s brand include three recent IPOs (initial public offerings) and a growing list of highly profitable exits that result in new wealth creation and people willing to invest in new start-ups.

“Our real X factor is the Music City brand,” Moyer said. “They (musicians and songwriters) are risking everything. The entrepreneurial mindset is baked into their DNA. Creative tech is what sets us apart.”

Other factors that he identified as contributors to the city’s successful growth of its start-up ecosystem included the absence of a state income tax, great quality of life, excellent schools, and a diverse array of tech jobs that was not always the case.

There’s also what he called the “foodie thing” that Moyer found very surprising and the fact that “you can come here and really make a difference rather than simply getting lost.”