Hosted by the Knoxville Entrepreneur Center (KEC), the program drew a much different group of attendees than those attracted to an event featuring tech-based start-ups. As such, it helped showcase the diversity that is the region’s ecosystem just one day before the finale event for the inaugural cohort of the “Techstars Industries of the Future Accelerator.” 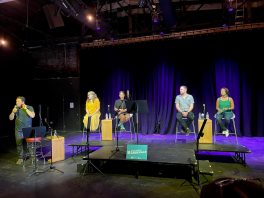 They were (left to right in photograph with McAdoo far left):

In advance of their presentations, McAdoo asked the four to share their pivoting moment with attendees.

The vivacious Almeida described coming to the U.S. from her native Argentina with her husband and family in 1986. At the time she did not speak English and said she learned to do so by watching the “Young and Restless” soap opera. Today, she has built a very successful company that is well-known for its work with various painting styles including faux finish, texture, concrete overlay, Venetian plaster, and stenciling.

“You have to have faith that you can do it,” Almeida told the attendees. “You need people that work with you, not for you.”

As noted in this September 2021 teknovation.biz article, Adams was a long-time corporate executive who experienced her pivotal moment in a conference room during a business trip to Brazil. The experience involved an intern for her employer, his nervousness at speaking with Adams, and the advice that one of her colleagues offered about the meeting with the young man after it had ended.

About the transformative moment that she characterized as the “installation of hope,” Adams said, “Open your awareness to how you make people feel.”

Cummings said he started his glass making business as a side hustle to make money to help pay for food. He was in Louisville, KY at the time running a studio for artists, and his goal was to sell 20 to 30 craft beer glasses each month to supplement the family’s income. Fast forward a few years, and his company has both the unique glass business as well as its craft brewery.

Noting that “I did not have much of a plan, it was more very reactive,” Cummings said his pivot point was winning the “Small Business Excellence Award” in the 2020 edition of the Knoxville Chamber’s “Pinnacle Business Awards.” His advice to entrepreneurs was straightforward: “How you get to success is going to be different; your path is going to be the difference that uniqueness makes you you.”

Troutman said there were several pivot points in her life before she realized that she “needed to be building something for my purpose.” Reminding attendees that a pivot is not permanent, Troutman shared one of her pivot points when she was fretting over a big decision, and her grandmother offered some sage advice: “You just make the decision and then you make it right.”

“What we always need is to be pushed out of our comfort zone,” she said, having noted earlier that “pressure comes before the pivot.”