It was the second time in a few weeks that Weber has competed in a pitch event, this time representing the Haslam College of Business at the University of Tennessee, Knoxville where he will graduate in December with his MBA. He was also one of six contestants who vied for honors in the annual “Startup Day” in Knoxville in late September. During that local event, Don DeRosa and Eonix LLC captured the eyes of the judges and a $3,000 prize award from Truist, while John Phillips of Primeaux wowed the audience to become winner of the $7,000 “Crowd Favorite.”

Ironically, the top two prizes in the SEC competition went to students at schools that have swapped places in the latest football rankings. Vanessa Sachs, a University of Georgia student who founded SWAKE Cosmetics, captured first place, while Brian Henderson from the University of Alabama placed second for his start-up named Tuska Brew Solutions. 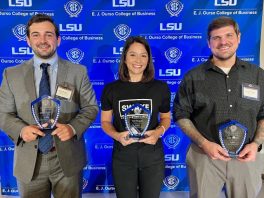 Weber (pictured far right) has been a prolific participant in entrepreneurial programs and competitions in addition to being a full-time student. He participated in the inaugural cohort of the “Veterans in Residence” (VIR) program offered in 23 cities by Bunker Labs, a national organization with local chapters focused on military veterans who are pursuing entrepreneurship. That group met weekly. There were also two offerings from the Anderson Center for Entrepreneurship and Innovation (ACEI) in the Haslam College – the “Vol Court Speaker Series & Pitch Competition” and “Boyd Venture Challenge.” In the most recent edition of the latter competition, Weber won an investment of $20,000 for his start-up.

In this late July 2022 teknovation.biz article, Weber explained that extended reality is a newer term that essentially removes the lines between augmented, virtual, and mixed reality, allowing for hardware and software to be developed to a standard. For the “Boyd Venture Challenge,” Weber showed four different scenes that illustrated how extended reality could be used for enhanced training, maintenance, inspections, design, quality control, and even workflow management. They were a construction site with safety violations, a logistics warehouse with a drivable forklift, a farm with active beehives, and a virtual office environment with a functional desktop.

Established in 2015, the “SEC Student Pitch Competition” provides teams of undergraduate and graduate students from SEC schools a platform to showcase their ideas for ground-breaking products and services to a panel of judges. Lynn Youngs, ACEI Executive Director, reported that 12 of the 14 SEC schools competed this year.

Click here to learn more about the event and here to read about the 12 start-ups that pitched..