“Permaculture found me while I was living in Spain,” says Justin West, Co-Founder and Chief Executive Officer of Thrive Lot.

Today, the Knoxville-based start-up founded in 2019 has 115 projects underway in 29 different markets, all focused on its value proposition to “beautify your landscape and grow food for life.” It’s a passion for West who was born in the Bay Area of California to parents who were West Tennessee natives. When the family eventually moved back to their hometown of McNairy County, he got involved in the 4-H movement, ultimately competing in a national event for ecological design.

“It was a great experience, seeing how human action and interaction with land can absolutely impact the world,” West explains. Later, as a student at the University of Tennessee, Knoxville (UTK), his passion for entrepreneurship was further ignited by another interest, this one reading biographies.

“I learned all successful entrepreneurs were great sales people,” West says. During his collegiate career, one of his early start-ups was an eCommerce company named BuyOrangePants.com which coincided with the Derek Dooley era as Tennessee’s football coach and his propensity for wearing orange pants. 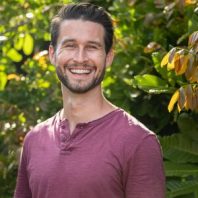 After graduating from UTK, West honed his sales skills for nearly three years in Florida, working for a company where he became the #4 salesperson among several hundred before an epiphany in 2015 that shaped the years that followed.

West said he continued to ponder that idea as he and his now wife traveled around the U.S., focusing on development of a platform that would support people who wanted to create a biodiverse system that decreases inputs while increasing outputs. A little more than two years ago, he joined with two other Knoxville entrepreneurs – brothers Daniel and Micah Hodge – to launch Thrive Lot. Daniel is Vice President of Product, while Micah is Vice President of Engineering.

As described on its webpage, the company “was founded by a renegade team who thought there must be a better, more sustainable way to grow food without harsh chemical input, soil erosion, landscape degradation, or the use of unnatural methods. Thrive Lot brings organic food production closer to home by designing, installing and maintaining edible landscapes and forest gardens.”

West describes the start-up as a “SaaS-enabled marketplace,” explaining that the platform helps what Thrive Lot characterizes as “visionary homeowners” connect with resources they need to design the landscapes they want. Those resources include:

The step-by-step process is described here.

“We’ve done a few projects in Knoxville, but have been really active in Atlanta, Columbus, Denver, Memphis and South Florida,” West says. After bootstrapping the start-up during its early days and securing $1.1 million from angels and the proverbial “Friends and Family” sources, Thrive Lot, which is set-up as a public benefit corporation, is now raising $4 million in equity funding.

He adds that the long-term growth could be as an Internet-enabled franchise like Uber.