The focus on electric vehicles in the Volunteer State and the third edition of an economic impact study were major topics when the Tennessee Advanced Energy Business Council (TAEBC) held its annual “Opportunities in Energy” forum Tuesday afternoon.

Like so many other events, TAEBC’s normally in-person year-end session was delivered virtually, beginning with an overview of the State of Tennessee’s strategy for being the number one state for electric vehicle (EV) production in the country. It already holds the top spot in the Southeast.

With three original equipment manufacturers already making EVs in the state or announcing plans to do so soon and more than 900 suppliers in the automotive sector, Tennessee is already well-positioned. “When it comes to the Southeast, it’s not only to be the leader, but also have a large market share,” said Bob Rolfe, Commissioner of Economic and Community Development.

He noted that $4.2 billion has been invested in upgrading or adding new facilities to manufacture EVs, and annual purchases of these vehicles in Tennessee exceeds 16,000. Going forward, the State has launched the “Drive Electric TN” initiative that has set a major goal of having 200,000 EVs on Tennessee’s roads by 2028. 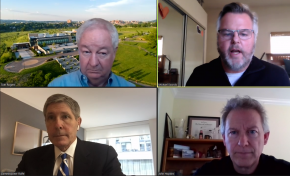 After his brief comments, Rolfe joined a panel comprised of John Hopkins, Chief Executive Officer (CEO) of the Institute for Advanced Composites Manufacturing Innovation, better known as IACMI, and Mike Swords, Vice President for Government Affairs and International Relations with the Los Angeles Cleantech Incubator (LACI) and its Transportation Electrification Partnership. That session was moderated by Tom Rogers, President and CEO of the UT Research Park at Cherokee Farm.

Hopkins noted that his organization has on advanced manufacturing as a tool for lightweighting of vehicles since it was founded and continues to believe in the importance of composites in that equation. Swords, who spoke in August at another TAEBC event (see teknovation.biz article here), again discussed the LACI-led “Transportation Electrification Partnership” launched two years ago. It is seeking $150 billion for the multi-faceted initiative that LACI believes could create more than 2.25 million jobs.

A second panel discussed the importance of the advanced energy sector to the economic vitality of Tennessee and the important role that TAEBC is playing with its every few years study of the growing sector.

“Twelve percent of the state’s GDP (gross domestic product) is in advanced energy,” said Matt Murray, Director of the Howard H. Baker Center for Public Policy at the University of Tennessee, Knoxville (UTK). He is the author of TAEBC’s “Tennessee Advanced Energy Economic Impact Report” that was first published in 2016 and updated in 2018. The next edition will be released in 2021.

Calling the growth in the sector “rather remarkable,” Murray said advanced energy as a category was “growing at a much more rapid pace than the economy as a whole.” He added that what is going on in the Volunteer State in advanced energy is attracting national attention, creating “hot jobs” as he described them.

“We’re not engaged in alchemy,” Murray said. “Advanced energy is a winning sector.”