The Tennessee Advanced Energy Business Council (TAEBC) is one of 50 companies or organizations from across the country interested in cleantech that have signed-on to a massive, $150 billion transportation electrification proposal led by the Los Angeles Cleantech Incubator (LACI).

In a Zoom event hosted yesterday where the proposal was reviewed, TAEBC Vice President Cortney Piper told attendees the statewide organization’s support for the proposal aligns with its belief that advanced energy should be used as an economic development driver. That philosophy is underscored by the release of two editions of TAEBC’s “Tennessee Advanced Energy Economic Impact Report,” the most recent in 2018. 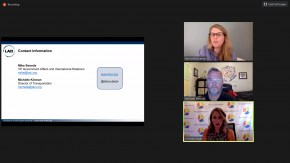 Yesterday’s virtual event featured two representatives from LACI who are playing integral roles in the effort that includes supporters from 15 states. The representatives were Mike Swords, Vice President for Government Affairs and International Relations, and Michelle Kinman, Director of Transportation. They are pictured in this screen shot with Piper who moderated the program.

The proposal that LACI has submitted can be found here, and Swords said that it was gaining bipartisan support in Congress.

TAEBC made a connection with LACI when it hosted a luncheon during the 2017 “Innov865 Week” where Jetta Wong, LACI’s Senior Advisor and the former leader of the U.S. Department of Energy’s Office of Technology Transfer, was in town to keynote an event dubbed “Technov865.”