On a day that symbolized one of the most fundamental rights of a democratic nation – the ability to elect our governmental leaders, attendees at yesterday’s inaugural PolitiCode event witnessed the bright future for our community.

It was all thanks to about 40 Knox County students who committed part of their non-school day to becoming teachers and showcasing what they are learning in the classroom about coding. The “students” were local elected and appointed governmental officials who made a commitment to participating, starting with Knox County Mayor Glenn Jacobs.

For readers outside of Knoxville, yesterday was Election Day with voters going to the polls to elect a new Mayor and City Council, and many of those polling places are in local schools. As such, it was a day off for Knox County students. 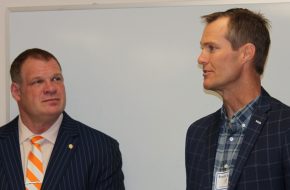 For Bruce, one of the key instigators behind the 2017 successful local effort to break the Guinness Book of World Records for the most people learning to code at the same time, it was another way to cast the spotlight on the importance of coding in terms of the jobs of the future, a theme that Mayor Jacobs reiterated in his brief comments. (Both are pictured at left.)

“When you’re looking at the opportunities of the future, this is what it’s all about,” the Mayor said. It was a theme he emphasized a few months ago at the inaugural KTech meeting when he said, “Manufacturing is no longer the economic driver (for communities). Technology and innovation are. Things that we once thought of as science fiction are now reality. We have a tremendous advantage here. It’s the opportunity to not only survive but to thrive.”

At the start of the roughly 90-minute event, Bruce thanked the students from the schools “for making it a day on” rather than one out of school. He later told two television reporters that the activities that the students chose to showcase in six different classrooms were decided by them and their teachers.

“They were taken directly out of the schools” and the classes they are taking, he explained. “They are a view of what’s happening now in our schools.” The demonstrations were as follows:

The students, officials and others posed for a group photo before the coding demonstrations began. 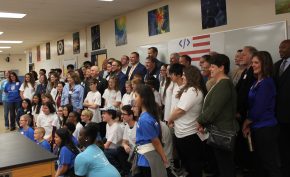 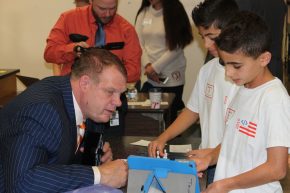 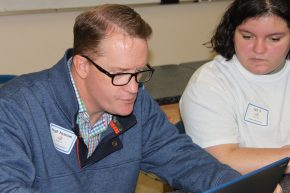 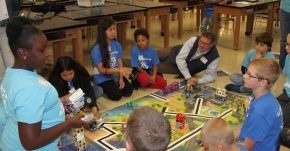