When we interviewed Brandon Bruce for this recent article about the inaugural event for the new Knoxville Technology Council (KTech), he promised that it would be unique in a number of ways, and last Thursday’s gathering at Jewelry TV in West Knoxville clearly lived-up to his pledge.

More than 425 people pre-registered for the event, and a high percentage of them actually showed-up for the nearly three-hour program that was followed by a networking opportunity on the rooftop patio area of Jewelry TV. The session kicked-off with a video summarizing the region and its exciting technology. Here is Bruce (pictured right) watching the opening video.

From my vantage point, a majority of the audience was comprised of individuals who do not typically attend these sorts of events. That, in itself, shows that Bruce and the organizing Board of Directors are on the right track. What really stood-out for me, however, was how the Co-Founder of Cirrus Insight, who served as emcee for the program, and the presenters of technologies reinforced this key point that Bruce made in announcing KTech: “Our goal is to have an organization that is industry-driven (and that is) of, by, and for the members, and in service to the Greater Knoxville community.”

Unlike traditional events in the region where technologies are pitched, usually by the researcher/inventor, this one featured representatives of 11 local companies who have launched technology-based ventures that they are actively growing them in the Knoxville-Oak Ridge area. And, as Bruce had promised, the presenters from each of the companies went more in-depth in terms of how their technologies actually work than you would experience at a typical pitch event.

“I want attendees of the launch event to see live demonstrations of technology that they can’t see anywhere else,” Bruce said in the previously referenced teknovation.biz article. I think anyone who attended Thursday’s presentations would agree he more than achieved that goal.

To underscore the robustness of the local tech-based companies, Bruce selected RDI Technologies Inc. to be the first presenter. As noted in this post from Friday’s edition of teknovation.biz, the four-year old company was just named No. 33 on the annual “Inc. 5000” list, making it the top ranked manufacturing company on the list from Tennessee and the No. 2 company overall from the Volunteer State. RDI President Bob Wilson is pictured (left) with a slide showing the names of some of the customers who monitor the condition of their plant machinery and manufacturing equipment utilizing its Iris MTM product.

Other companies that presented were Blühen Botanicals, GRIDSMART Technologies Inc., Qardian Labs, EDP BioTech Corporation, Radio Systems/PetSafe, Reviewbox, Lunchpool, Active Energy Systems, Winter Innovations (by pre-recorded video), and General Graphene. Ironically, even though I have posted one or more articles about all but one of the companies, I still learned new things about them.

Lest you think the rapid-fire presentations were dry, I can assure you they were not. They were interspersed with good use of humor by everyone from James Horey of Reviewbox to Nate Futral of Blühen Botanicals, Jason Liggett of EDP BioTech, and Alex Abell of Lunchpool. The latter is a very new resident of Knoxville . . . just a few weeks . . . who followed his wife from Tampa to Knoxville after she accepted a teaching position at the University of Tennessee, Knoxville. He co-founded the start-up that has developed an app to help individuals build relationships with work colleagues over lunch.

Midway through his presentation, Abell (right), who was wearing a red baseball cap, apparently noticed people trying to read the lettering, so he told them it read “Make Lunch Great Again,” not something else they might have guessed. That drew a laugh as did a later comment when he told the attendees that he was a Georgia fan, but would support Tennessee now because that was where his wife’s paycheck originated!

At the beginning and midway through the event, the top two locally-elected officials made presentations. Knoxville Mayor Madeline Rogero, who only has a few months remaining in her term-limited tenure, said that she and her administration are committed to creating “a town where you and your employees want to live and your business will thrive.” 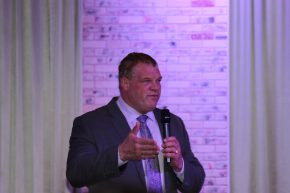 Knox County Mayor Glenn Jacobs (left), who has not been in office for a year yet, talked about the rapid evolution of technology and the great positioning of the region. To underscore his points, he recalled getting a Commodore VIC-20 computer followed a Commodore 64 and how that technology has mushroomed with the region now being home to the world’s fastest computer at Oak Ridge National Laboratory.

“Manufacturing is no longer the economic driver” for communities, Jacobs said. “Technology and innovation are. Things that we once thought of as science fiction are now reality. We have a tremendous advantage here. It’s the opportunity to not only survive but to thrive.”

And that’s exactly where Bruce and the founders of KTech want to place their emphasis . . . casting the national spotlight on the region while also helping local tech companies grow.