A start-up focused on bringing more dignity to foster children and another than is creating “beautiful home goods out of 100 percent recycled materials” captured first place in their respective categories in yesterday’s “Pitch for Good” event.

Organized and hosted by the Nashville Entrepreneur Center (NEC) with support from Dell for Entrepreneurs, Thursday’s edition of the series was focused on Nashville-based Founders. And, like all of the previous “Pitch for Good” events, there were three competitors in each of two categories – “Launch,” defined as revenues no more than $25,000, and “Up and Running” for those who have achieved a threshold of at least $25,000 in revenue.

The “Crowd Favorite Award” and a credit for an NEC program went to Olivia Busk who pitched EndoShunt. As she described it, the medical device would address preventable deaths that occur when trauma surgeons do not have sufficient time to reroute blood to avoid hemorrhaging before a patient dies from injuries such as those sustained in a car accident. 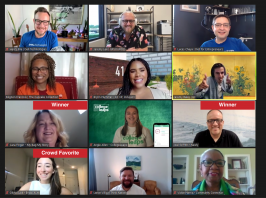 The winners (so designated), four judges (top row and far left on second row), and NEC staff (Brynn Plummer and Jeremy Raley on second row) are captured in this photo. Finger and Griffin are pictured on row three while Busk is on the fourth row.