Anyone who has ever attended an economic development event knows there’s a good deal of excitement surrounding the announcement of something new coming to the community, and that was certainly the case when probably 200 people turned out for yesterday afternoon’s celebration of the new Red Stag Fulfillment LLC campus in Sweetwater.

Located just off Exit 62 of Interstate 75 in Monroe County, the event attracted a wide ranging group of business, community, and government leaders, not only from the immediate area but from other parts of East Tennessee as well. The list of dignitaries was led by Governor Bill Lee, yet the occasion was neither a traditional groundbreaking nor was it a ribbon cutting; it might be described as a pandemic-delayed celebration of a massive campus that was publicly announced in January 2021 (see teknovation.biz article here) and that has the potential to transform the economic base of one of Tennessee’s more rural counties. 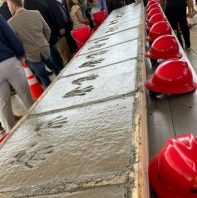 The festivities, which featured a non-traditional ending as depicted in this photo and described at the end of the article, took place under the partially completed roof of Building A, a 700,000 square foot structure that is under construction with hiring expected to begin in a few months. The initial facility is the first of six similar structures that collectively will provide up to 4.5 million square feet of fulfillment space, all for Red Stag that specializes in big, heavy stuff that is harder to ship and harder to store.

“This will become our East Coast hub,” said Jordan Mollenhour (pictured left at yesterday’s event), one-half of the Mollenhour Gross team of which Red Stag is a portfolio company. As described in this teknovation.biz article when we visited the Knoxville fulfillment center on Cyber Monday 2021, Red Stag has been on a hockey stick growth curve since its founding in 2013. From its initial 210,000 square foot warehouse in Knoxville, Red Stag has expanded quickly by adding a Salt Lake City site in 2017 followed by an additional 313,000 square feet at its Knoxville location that opened in phases. Red Stag also announced an additional Salt Lake City facility is in the works.

Unlike many of these economic development events where the new “kid in town” says the expected nice things about the community and the local leaders that have rolled out the red carpet return the compliments, this one had the feel of genuine warmth that both sides felt for each other. The praise started early when, after thanking his wife and children for their patience and understanding, Mollenhour took time to give credit to a number of individuals.

Of contractor Joseph Construction, he said, “They’ve been patient with me, and I’ve occasionally been patient with them.” Others on whom he heaped praise included engineering firm Cannon & Cannon, Johnson Architecture, GEO Services, local elected and appointed officials, and “last but not least, the tradesmen and subcontractors.”

In introducing Sweetwater Mayor Doyle Lowe, Mollenhour said that he was “a great example of what it means to lead,” quoting a proverb that reads, “A society grows great when old men plant trees in whose shade they shall never sit.” While Lowe asked good naturedly if Mollenhour was predicting his demise in the near future, the Mayor also returned the compliments, citing a comment that Mollenhour made in their first meeting. “I always come to the Mayor. If he’s not for it, we move on,” Lowe recalled Mollenhour saying. That produced this response from the Mayor: “Let’s see what you’ve got,” and those who attended Wednesday’s event got a glimpse into the future. 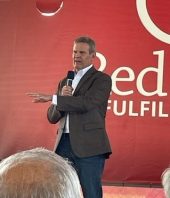 For Sweetwater, the fully developed campus will produce $1.5 million in expected property taxes and another $3 million for Monroe County, Lowe said. The Mollenhour Gross/Red Stag site selection team looked at 70 possibilities including several in Tennessee. “This was our preferred site,” Mollenhour added, a point that Governor Lee reinforced in his later comments about Tennessee.

“We live in the greatest state in the country,” the Governor (pictured right) noted. “It (projects like the Red Stage campus) is not about steel and dirt; it’s about changing lives. We (government) create an environment for people to change their lives.”

The property was purchased almost a year ago (late May 2021), and clearing began the next month. Red Stag broke ground on Building A in late October 2021 with an estimated opening day the first week of September 2022.

The event concluded with the principals embedding their handprints in wet concrete blocks that will be placed later at the main entrance to the facility.