“I admire and appreciate the innovation you are pursuing and the fact that you are doing it here,” Marty Brown, PYA President and Chief Executive Officer, told the leaders of the five start-ups participating in the inaugural “Spark Cleantech Accelerator” during a presentation on Wednesday.

Titled “Early Stage Companies: Each Move Counts!,” Brown mixed lessons from his more than three decade career at the Knoxville-founded, national professional services firm along with famous quotes from others to offer guidance to participants in the program that will conclude with a “Demo Day” on August 30 (registration details can be found here).

PYA’s leader is known for his frequent statements that “we want companies who start here to stay here, and those who move here to love here.” Noting that PYA has been part of founding 16 start-ups – some succeeded, others failed, and several were sold, Brown drew on lessons learned from those experiences and those that PYA clients have faced to offer advice in three categories.

“Inventors and founders can be their own worst enemy,” he said. Quoting Voltaire, Brown reminded the five entrepreneurs of a key point: “Don’t let perfect be the enemy of good. Perfection can really stymie a company.” In that vein, he was not suggesting that excellence is not a strategic goal for a start-up but rather that absolute perfection versus significant progress is a trade-off that must always be top of mind. 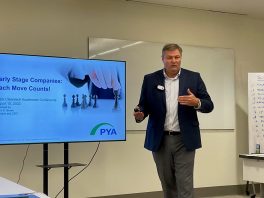 Brown (pictured right) emphasized the importance of investing in a clear, succinct explanation of the start-up and its focus that answers the WIFM (what’s in it for me) question for customers, prospective employees, and potential investors.

“Don’t delay important corporate decisions,” he told the attendees, specifically addressing everything from how decisions are made in a corporate structure where two people each own 50 percent of the enterprise to assuming that “we know each other, so nothing (negative or disruptive) is ever going to happen.”

In that regard, Brown stressed the importance of finding the right professional services firm to meet needs and used the Goldilocks principle to illustrate the point: “Not too hot, not too cold, just right.” He added that it is important to make sure the person you need has the time to devote to you, not pass it along to a subordinate. If not, Brown advised to seek a referral from the person you had initially targeted.

“What you need most importantly is that person’s time,” he said.

Brown touched on the emphasis that must be placed on team building, particularly in today’s environment that he characterized as a “talent war everywhere.” In that vein, he stressed the importance of honest communication that builds trust around a shared vision and a unified management team.

To illustrate the importance of the unification point, Brown told the attendees to imagine they were pitching to a prospective investor who asked for a separate meeting with the start-up’s Chief Technology Officer. “Are you on the same page?” If not, that could certainly create problems.

Another element of the communication strategy is what he described as “assertive listening,” something advocated by Podcaster Dave Bailey. “It (listening to your co-workers) helps keep people on the team engaged and energized,” Brown explained.

Brown used Venture Capitalist  John Doerr’s book titled Measure What Matters to emphasize his third major area – the importance of aligning the strategic process with accompanying tactical efforts. Doerr calls them OKRs (objectives and key results). To illustrate how they can help drive progress, Brown talked about a PYA goal from several years ago to have clients in all 50 states. The firm developed a strategy, set a timeline with milestones, and measured progress on a regular basis. The firm checked the final state – Hawaii – several years later.

Brown closed with two pieces of advice. One was, “I have to be excellent on thinking about our purpose and communicating it every day.” The other, which underscored the importance of the team, was a Central African proverb that reads as follows: “If you want to go fast, go alone. If you want to go far, go together.”