A wife and husband team – she’s an Occupational Therapist, he’s a Neuroscientist – won the $10,000 top prize during the sixth annual edition of “The Pitch” on Thursday night in Johnson City. Organized by FoundersForge, the organization focused on those it describes as “underdog entrepreneurs,” the event was relocated to an indoor venue due to inclement weather. 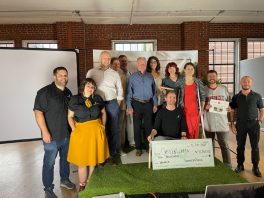 The winner (pictured here with others) was Green Llama, a company founded in early 2020 by Kay and Matt Baker. As described on the start-up’s website, they “came up with a project to reduce the huge amount of plastic under the sink. Kay took aim at reducing single-use plastic in the cleaning industry. During COVID, she worked with Matt to convert their garage into a laboratory where they tested a great number of formulations, cross referencing ingredients found on the EPA’s safer choice list and EWG’s database to create safe and effective surface cleaning ingredients.”

Anna Douglas, Co-Founder and Chief Executive Officer of SkyNano Technologies, is one of 20 individuals invited to participate in a new initiative organized by the Washington, DC-based Bipartisan Policy Center (BPC). Called the American Energy Innovators Network (AEIN), the new group is intended to serve as an entry point for policy ideas, political engagement, and strategic relationship building for innovative early stage energy entrepreneurs, start-ups, and investors.

The initiative builds off BPC’s work with the American Energy Innovation Council (AEIC) and aims to provide practical, actionable input into real-time federal policy initiatives and helps create a more effective partnership between the private sector and the federal government in finding energy solutions.

From West Virginia but with Knoxville Implications:

SPARKZ Inc., the electric vehicle-focused (EV) battery company with a significant presence in West Knoxville, announced last week the execution of a memorandum of understanding with the nation’s largest coal miners’ union.

According to this AP story, SPARKZ and the United Mine Workers of America will partner to recruit and train dislocated miners to be the first production workers in the company’s new electric battery gigafactory. In March, SPARKZ said it would start construction this year on the plant that will employ at least 350 workers.

A location for the factory has not yet been announced. SPARKZ plans to produce cobalt-free batteries, part of an effort to bring down the cost of U.S. lithium-ion battery production.

From Cookeville and Smyrna:

Executives from Tennessee Tech University and Nissan North America met recently to discuss partnership opportunities at a collaboration workshop in Smyrna that was focused on helping build and keep the automotive industry moving forward.

“Tech has been a great partner for a supplier of talent to help build that facility (Nissan Smyrna Assembly Plant) to what it has become over the last 40 years,” said Senior Vice President of Manufacturing and Supply Chain Management at Nissan and Tennessee Tech alumnus David Johnson.

At the Nissan Smyrna plant, there are more Tech graduates than any other university. The plant currently has 245 employees that attended Tech, with 187 of those receiving degrees. Seventy-four percent of those were engineering degrees, with 54 percent in mechanical engineering.

As a part of the collaboration workshop, Deans from the Colleges of Education, Business and Engineering met with Nissan leaders and workers to discuss opportunities in their respective areas. Topics on business analytics and operation management, preparing future workforce and occupational pathways programs and engineering and Nissan partnered projects were discussed.

From Nashville but with Statewide Implications:

After a year long wait, Life Science Tennessee (LST) has announced that its popular “Beer & Biotech” meet-ups will return this fall. They are planned as a quarterly event in five markets: Memphis, Nashville, Knoxville, Chattanooga, and Tri-Cities. The first meet-up will take place this fall, and the overall schedule will be released in the coming months.

Interested in storytelling this weekend? The annual “Flatwater Tales Storytelling Festival” returns Friday and Saturday for its first in-person performances since 2019 at the Historic Grove Theater in Oak Ridge. The event will feature nationally renowned storytellers, Sheila Arnold, Bil Lepp and Kim Weitkamp. Additionally, attendees can enjoy a writing workshop by Lepp on Thursday and a free tour of historic Oak Ridge by local historian, Ray Smith, on Friday. Click here to buy tickets.

LST also reported in its latest newsletter that SweetBio “has its eyes set on taking the next step with its signature product, APIS.” The product is focused on helping with hard-to-heal wounds and surgical incisions to give patients a new path to recovery. APIS received U.S. Food and Drug Administration approval in 2019, just a few months before the COVID-19 pandemic which slowed commercialization plans. Now, SweetBio plans to roll out APIS into full commercialization this fall.

Three Tennessee projects made Site Selection Magazine’s “Top Deals in 2022” including one tied for first place. That one was the “Blue Oval City” segment of Ford’s $11.4 billion, 11,000-job mega-plan with SK Innovation for electric vehicle (EV) and battery production in Tennessee and Kentucky. The Tennessee portion, which will be built in the Memphis Regional Megasite in Stanton, represents a $5.6 billion investment expected to create 5,700 jobs.

Ranked #7 nationally was Oracle Corporation’s announcement that it would invest $1.2 billion and create 8,500 jobs in Nashville. The third project, ranked #13 nationally, was Ultium Cells plans to build the new plant on land leased from General Motors that will supply battery cells to the automotive manufacturer’s Spring Hill assembly plant. That represents a $2.3 billion investment that is expected to create 1,300 jobs.

Three local government organizations in the region have announced their selection of Joe Barker, longtime Executive Director of the Southwest Tennessee Development District, as their liaison for Ford’s “Blue Oval City” project. The former Assistant Commissioner in the Tennessee Department of Economic and Community Development was selected for the role by his organization’s Board of Directors along with the West Tennessee City Mayors Association and the West Tennessee County Mayors Association. Prior to his state service, Barker was a Mayor at different times of the City of Savannah and Hardin County.