(EDITOR’S NOTE: This is the final article in a two-part series describing the evolution of the Harper Auto Square enterprise and the plans by its young President and Dealer Principal for the future. Part 1 published in Teknovation Weekend and can be found here.)

One of the dealership group’s signature events is its “Cars & Coffee” showcase that was launched a decade ago with 75 cars shown. Now, the event held at West Town Mall on a Sunday morning attracts 10,000 guests and 6,000 different cars on display.

Have you heard how the event was started? Shannon Harper, President and Dealer Principal of Harper Auto Square, shared the story with us which says a good deal about the way the company engages with its customers and the community. It also offers insights into plans for the future. 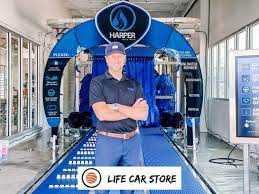 The new Harper Auto Wash facilities were the result of a need to serve customers as well as the company’s vehicle preparation operation, but also a way to diversify revenue sources.

Trying new things, cultivating talent and promoting from within are hallmarks of Harper Auto Square that were embodied in the philosophy of the late Tom Harper, Shannon’s father. “He managed by walking around,” the son says. “Ninety-two percent of our managers are promotions from within. Many of our General Managers have been with us more than 20 years.”

Unlike many businesses of all types, Harper says that the company is not experiencing employment challenges. That’s good news considering the supply chain issues that have created an already challenging environment in terms of new vehicle availability.

“We are so massively controlled by the manufacturers,” Harper says, adding, “Today, there are so many unknowns and risks in the automotive business. The costs for a single-point dealership are getting more challenging,” citing mandates from the manufacturers about items like customer satisfaction scores and facility upgrades.

Yet, describing himself as the eternal optimist, Harper is moving forward to further position the dealership group for long-term success.

Saying 10 to 30 rooftops (individual dealerships) is manageable with good centralized services, he unsuccessfully bid on the Kelly Subaru franchise in Chattanooga when now Mayor Tim Kelly sold it in late 2020, but lost out to Crown Automotive Group. Adding to the Harper dealership count, however, is clearly a possibility, whether in the immediate area or in the region.

There are plans to build a new Collision Center on Murdock Drive to allow for a larger facility and also free-up land, and there will likely be more Auto Wash facilities on the horizon.

The self-described eternal optimist is truly bullish on Knoxville.

Noting that “we have so many people moving here,” Harper asks a fundamental question: “What can we do more to make Knoxville a vibrant place to live?” One answer is to address the gap in angel and venture capital. Another is to recruit more entrepreneurs to the region while also inspiring those already here to pursue entrepreneurship.