(EDITOR’S NOTE: This is the first article in a two-part series describing the evolution of the Harper Auto Square enterprise and the plans by its young President and Dealer Principal for the future. Part 2 will publish on Monday in the weekday edition of teknovation.biz.)

Shannon Harper says his father’s boredom in the restaurant business – Tom Harper was one of the founders of the Ruby Tuesday restaurant chain – and the resulting decision to change careers more than 30 years ago created the opportunity that he has today to lead an enterprise known as Harper Auto Square.

Since its founding in 1981 selling high-end vehicle brands – Porsche, Audi and Jaguar, the company has grown to seven dealership “rooftops,” 13 franchises, a certified collision center, and now the region’s first two premium flex-service car washes – one in West Knoxville and the other near the Knoxville Airport. All of its dealerships are located in West Knoxville, either on Kingston Pike or Parkside Drive, with one exception. 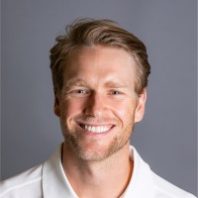 Today, Harper Auto Square is the region’s largest operator of luxury brand dealerships with plans to continue to grow, consistent with the consolidation that is occurring across the automotive sector.

We had the opportunity to interview Shannon (picture right) as he greeted customers and helped the team on the second day of operation for the new Harper Auto Wash on Alcoa Highway near the airport. As we observed his interaction with customers and employees, it was clear that the President and Dealer Principal who eschews an office genuinely likes people, and they return the feelings.

That fact mirrors this sentence from the obituary of Tom Harper: “He created a culture at the dealerships that honored relationships above all else, and treated his employees as he did his family, with love and respect.”

“My dad was good at not pushing me in one direction,” Shannon told us, adding, “He never expected me to do it the same way he did.”

When his father secured the initial three franchises, Shannon said the elder Harper had no experience in the car business, so he relied heavily on Dale Underwood, his business partner for years until the latter died in 2009.

Now, a little more than a year after his father’s death in May 2021, the son has again taken another giant step to run the dealership group.

“Our goal is to be the best at service around anything automotive-related,” Shannon explains. In his style of giving credit to others, he says the growth is a tribute to “a phenomenal team and the best HR Manager in the business.”

The self-deprecating son says that he never has an original idea – something we doubt, but instead listens to other people. “I tend to ask, ‘What’s not going to change rather than what is going to change,’” he says. The approach, along with an internal need to serve its operations and the customer base, caused Harper Auto Square to open its Auto Wash.

NEXT: The unknowns – from the economy to supply chain challenges and the expectations of original equipment manufacturers – call on Shannon Harper’s entrepreneurial skills to continue innovating and growing.