(EDITOR’S NOTE: This is the first article in a two-part series spotlighting Cirrus Aircraft in general and, more specifically, the role it is playing in helping cast a spotlight on this region in ways that might not have been imagined a few years ago.)

There’s no question that the Volunteer State in general and East Tennessee in particular are hot destinations for people who are relocating from California and the Northeast in part due to the flexibility that remote work has enabled.

Over the past few months, we have noted several studies underscoring the trend: (1) a report from PODS, the company responsible for those mini-shipping container-style rectangles, ranking three East Tennessee cities as #2, #3 and #4 nationally in communities where people are moving; (2) a study by SmartAsset showing Tennessee is in the top 10 in terms of places Millennials are moving; and (3) U-Haul’s report that ranked Tennessee #10 among the 50 states and Knoxville #7 in the country in terms of migration trends.

What are some of the factors driving these moves? Tennessee obviously is a low tax, business friendly state, and East Tennessee is known for its quality of life, particularly for those who like outdoor recreational opportunities. But, are there other factors that are casting the spotlight on the Knoxville region?

In the second article in a recent teknovation.biz series that posted earlier this year, we quoted Maribel Koella, a long-time commercial real estate broker in Knoxville, who cited two very different enterprises that are helping draw new attention to the region. One of those was Blackberry Farm Resort, the 4,200-acre mountain haven, and its sister property named Blackberry Mountain. The other was Cirrus Aircraft which announced its new Vision Center at Knoxville’s McGhee Tyson Airport in 2015 and opened the first building in 2016. 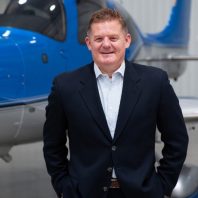 We had the opportunity recently to talk with Todd Simmons, President of Customer Experience for the manufacturer of personal piston and jet aircraft. He’s a 13-year veteran of Cirrus Aircraft that has grown its local presence from one factory service building when the Vision Center Campus first opened to five thus far with more on the horizon. All of the aircraft are manufactured in Duluth, MN, but every airplane delivery to each customer and his or her flight training occurs at the Knoxville campus.

“When you think about the type of people we are bringing to the Knoxville area for delivery and training, it’s really powerful,” Simmons says. They are generally high-net worth individuals who spend anywhere from a few days to two weeks locally to get required training.

“The Cirrus Aircraft experience in Knoxville has surprised and impressed so many of our customers,” Simmons says. After our discussion, it was obvious that the highly personalized way that Cirrus serves its customers is clearly something that plays a key role in the experience that they feel. We’ll describe that process more fully in the second article in this series.

So, how did Cirrus Aircraft decide to open its Vision Center in Blount County and how is its approach to the customer experience helping cast such a positive light on the region?

We captured the early history of the company when Dale Klapmeier, who co-founded Cirrus Aircraft with his brother in their family barn in Minnesota in 1984, spoke in 2018 at a Sky City Initiative meet-up (see teknovation.biz article here) in Maryville. It was another 15 years, however, before the company started mass-producing its initial piston airplane – the SR20. Today, there are two other piston models – the SR22 and SR22T – along with the single-engine Personal Jet, the Vision Jet.

A distinctive feature of the four models is the Cirrus Airframe Parachute System® (CAPS®). In an emergency, the whole-airframe parachute system is designed to allow the airplane to safely glide to the ground much like a person parachuting. You may have noticed television coverage of this May 12 incident where the technology likely saved the lives of a pilot and passenger in Colorado after a collision with another airplane.

NEXT: How did Cirrus Aircraft decide to come to this region?