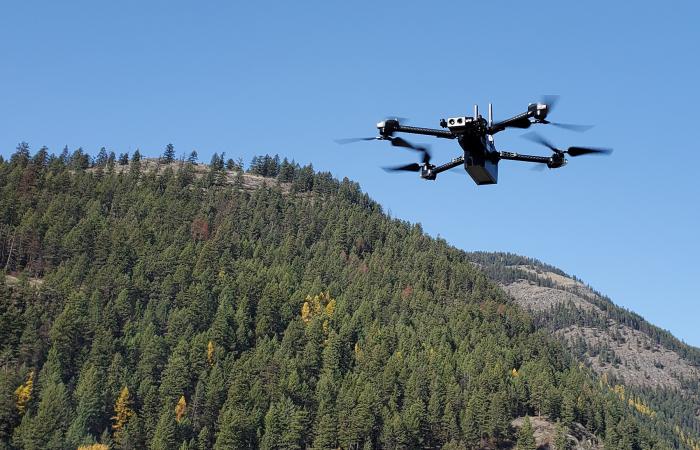 Can wildfires be prevented? Sometimes, no, but a lot of times, yes. Researchers at Oak Ridge National Laboratory (ORNL) are doing what they can to both prevent fires and reduce their damage, specifically in regard to the electrical grid.

They’re doing so using sensors, drones, and machine learning through targeted funding from the U.S. Department of Energy (DOE). Those mechanisms aim to stop fires from being started by the electric grid and protecting the grid from fires.

“We chose this research to be accelerated because we recognize how critical and hazardous wildfire has become due to climate change and other factors,” said Stewart Cedres, a Senior DOE technical lead and strategist. Cedres points out wildfire damage to transmission lines can cause brownouts and blackouts several states away.

Peter Fuhr, head of ORNL’s Grid Communications and Security Group, is working on these problems with a team of lab researchers. They’re also paired with the U.S. Forest Service, as that’s the agency generally tasked with fighting wildfires.

When it comes to preventing fires from starting at the hands of electric grids, Fuhr’s team is looking into sensors and drones to do the work.

Sensors placed near powerlines or in electronic equipment can detect variations in power flow that could lead to superheated sparks. That tends to happen when electricity jumps from one conductor through the air to another. ORNL researcher Ali Ekti is developing an algorithm to recognize and classify those variations as nonthreatening or anomalies. Next steps including training a software program to recognize and pinpoint where these power jumps are happening, and alert staff to check on the location.

But sometimes getting a truck out to a remote grid site isn’t the best option if a fire is about to break out. That’s when you send in the drones.

Fuhr’s team is experimenting with drones equipped with sensors that record video and detect audio, heat, and radio frequencies. Those features can confirm detected problems, letting crews know if something needs to be repaired before anything bad happens.

“Drones are already out there doing vegetation management. So why don’t we use an additional technology on the same platform to check for arcing at the same time?” Fuhr said. “We’re establishing demonstrations in the coming year at utilities large and small across the nation.”

His team was recently granted unusual authorization to fly drones throughout the U.S. by the Federal Aviation Administration.

All this research is ongoing when it comes to stopping fires from starting. But what about when the flames are already roaring?

That’s where the sensor-equipped drones come back in, this time to thermally detect sparks ahead of a full-fledged wildfire.

Fuhr’s team recently tested this in a controlled experiment at a farm near the national lab. They lit a contained bonfire among scatted small cans of burning gel fuel. This helped as they worked to determine how high up drones could be and still detect flames below. The farther away the detection works the better because a melted drone doesn’t help the cause.

“Heat-detecting sensors have so many applications that can increase our situational awareness and knowledge of where heat and fire are,” said Marva Willey with the U.S. Forest Service. “It’s all about knowing what’s going on before you put people out there.”

People right now are the only ones who can really do this work, mainly by hand. People must use their own sight, hearing, smell, and sense of temperature to know if a fire is about to start or totally out. Drones that fly out of the line of vision can help firefighters approach a wildfire in smarter ways, by sensing far away heat that isn’t visible, and locating remaining hotspots.

Willey, a fuel specialist working on the Forest Service tools and technology team, said this could be game-changing, especially if these sensors could find fires caused by embers that can blow up to a mile away from the initial blaze.

She noted that another ORNL project using sensors to detect heat from high altitudes could reduce the need for pilots to fly out to spot fires, especially those caused by lightning strikes, which would mean flying in dangerous weather conditions. That technology is scheduled for testing later this year.