In an announcement made yesterday at the “International Supercomputing Conference 2022” in Hamburg, Germany, ORNL’s Frontier supercomputer earned the top ranking as the world’s fastest on the 59th “TOP500” list, with 1.1 exaflops of performance. The system is the first to achieve an unprecedented level of computing performance known as exascale, a threshold of a quintillion calculations per second. 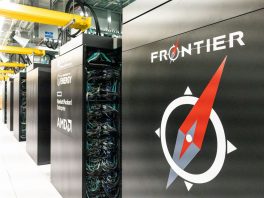 “Frontier is ushering in a new era of exascale computing to solve the world’s biggest scientific challenges,” ORNL Director Thomas Zacharia said. At Thursday evening’s finale for Cohort 1 of the “Techstars Industries of the Future Accelerator,” he told us that he was headed to Germany but did not reveal the reason.

“This milestone offers just a preview of Frontier’s unmatched capability as a tool for scientific discovery,” Zacharia added. “It is the result of more than a decade of collaboration among the national laboratories, academia and private industry, including DOE’s (U.S. Department of Energy’s) Exascale Computing Project, which is deploying the applications, software technologies, hardware and integration necessary to ensure impact at the exascale.”

The “International Supercomputing Conference” is a gathering of leaders from around the world in the field of high-performance computing. Frontier’s speeds surpassed those of any other supercomputer in the world, including ORNL’s Summit, which is also housed at ORNL’s Oak Ridge Leadership Computing Facility, a DOE Office of Science user facility.