“I’m so excited to be back in Tennessee,” says Lindsey Cox, the new Chief Executive Officer (CEO) of The Company Lab (CO.LAB), a non-profit organization supporting entrepreneurs and start-ups across Southeast Tennessee.

The former Director of Operations and Government Affairs at Launch Tennessee returned to the Volunteer State in early May after about 18 months serving in the Office of Innovation and Entrepreneurship in the U.S. Economic Development Administration (EDA).

“I used my time at EDA to see what all was being done across the country, and Tennessee is doing a lot of things right,” Cox says. Now, in what she describes as a “crucial time for the community that is coming out of COVID,” Cox is rolling-up her sleeves with both short-term and longer range plans.

“I missed Tennessee and the hands-on experience of working directly with entrepreneurs and empowering the community that will be possible at CO.LAB,” she says, adding, “It’s time for CO.LAB to get back to its roots as the premier entrepreneur center for the state. Other ecosystems have caught-up with us.” 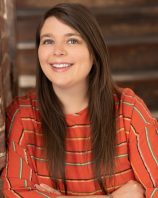 Throughout the interview, the always upbeat and enthusiastic former resident of Nashville and graduate of Tennessee Tech University was constantly smiling in describing her vision and plans. Cox succeeds Marcus Shaw and, if you go back several steps, Charlie Brock, her long-time mentor and former boss at Launch Tennessee.

Cox says the focus of CO.LAB should be on high-growth, scalable companies, and CO.LAB is in the midst of developing its next five-year strategic plan. “We will have the bones of that plan coming out of a workshop this month,” she says.

While the plan is being fully developed, Cox identified four priorities that will take CO.LAB to the beginning of 2022. They are:

While Cox is not yet ready to commit to a fifth program component, she sees opportunities in outdoor recreation, possibly a focused accelerator. In response to our question about the “HealthTech Accelerator” that CO.LAB ran the past two years in collaboration Erlanger, the nation’s 10th-largest public healthcare system, and Unum, a Fortune 500 insurance company, Cox said it would be folded into the year-round “GIGTANK 365” initiative.