The Knoxville Entrepreneur Center (KEC) held an in-person celebration Tuesday night honoring area private enterprises that made the latest “Inc. Magazine 5000” listing of the fastest growing companies in the U.S., and about 75 individuals showed-up for the festivities at the former Southern Railway Station in Downtown Knoxville.

Nineteen area companies made the latest listing, announced in August (see teknovation.biz article here), and 10 of those were able to participate in the event that was branded as “Growth and Grit” to recognize their hard work and outstanding achievement.

KEC Executive Director Jim Biggs kicked-off the evening by noting the “extraordinary accomplishment” of each company. He said they are “changing lives through entrepreneurship” and serving as an inspiration for others.

Following the unveiling of a video acknowledging their achievements and reinforcing Biggs’ message with a list of powerful words like innovating, thriving, serving, and performing that followed the phrase “East Tennessee is made for . . .,” KEC’s Chris McAdoo took over with a continuation of the passion and enthusiasm he demonstrated co-hosting last month’s “Startup Day” in Knoxville.

“We are here to become the most founder friendly city in America,” he declared. “We collaborate, create, invent and invest.” McAdoo then moderated a fast-paced, insightful, and humorous discussion with a representative from each of the 10 honorees in attendance.

The longevity award for a Knoxville area company on the list goes to KaTom Restaurant Supply Inc. which has been recognized 13 times. During his brief discussion with McAdoo, Charlie Bible, KaTom’s Vice President of Operations, issued a challenge for the region. “East Tennessee is a special place,” he said. “We have a lot of ability. We’re good, but we’re not great.”

Those were powerful words from a member of the family that has built a national business, located just off Interstate 40 Exit 407 in Kodak, that is expected to generate $500 million in revenue next year. 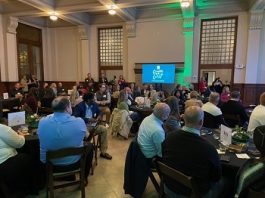 Setup for “Growth and Grit”

Bible was the second presenter, following Harry Boston of Oak Ridge-headquartered Boston Government Services (BGS), and the point that he emphasized about leveraging the great assets in the region was reinforced by the last presenter. Geoff Robson, Chief Financial Officer for RDI Technologies Inc., noted that “our potential is unlimited” in large part due to the University of Tennessee and Oak Ridge National Laboratory.

RDI Technologies, which led the local comes in the rankings in 2019 (#33 nationally) and 2020 (#301 nationally), uses its proprietary platform powered by Motion Amplification® to enable users to see and measure motion that is impossible to see with the human eye and could only be measured previously by contacting sensors. BGS has a team of engineers, scientists and technical professionals delivering services and solutions from strategic planning to field implementation.

Another repeat listee is RCN Technologies that has a mission to make sense of communications for commercial, public sector, and non-profit organizations. We spotlighted the company in this March 2019 teknovation.biz article.

In his remarks, Co-Founder Geoff Yearack said that he and his wife “set out to become one of the best places to work” when they launched the company in March 2013. “We wanted to build a business where we would be comfortable having anyone who worked here to our house for dinner.”

Two newbies to the list were: (1)  Keystone Mortgage Group which noted that the company had a 100 percent employee retention rate last year in spite of the impact of COVID-19; and (2) IB3 Global Solutions, another Oak Ridge-headquartered company that added 112 people last year, according to Sean Gleason, President and Chief Executive Officer. We spotlighted in this June 2020 teknovation.biz article.

Other companies participating in the Tuesday evening celebration were: