Building on a point that Moderator Cortney Piper made in her introductory comments, he said Tennessee’s advanced energy sector outperforms the Volunteer State’s other business sectors, something that will no doubt be underscored when TAEBC releases its updated economic impact report next week.

Over a roughly 30-minute formal presentation ahead of a Q & A session with two of his TVA colleagues, Lyash covered a variety of topics that dealt with what he described as the utility’s biggest challenge – building the energy system of the future. 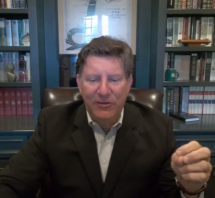 “The TVA power system is one of the nation’s cleanest,” he reminded attendees. “We’re committed to continuing to reduce greenhouse gas emissions.” Noting the utility is on a path to reach an 80-percent reduction by 2035, Lyash said that TVA aspires “for net zero by 2050.”

The event, usually held in-person but not this year or last year, is TAEBC’s annual “TVA Lunch and Learn” that has featured various TVA executives in the past. TAEBC will also host a “Statewide Energy Incentives and Programs Webinar” next Tuesday. More details can be found here.

As regular readers of teknovation.biz might expect, Lyash referenced on two occasions the “Techstars Industries of the Future Accelerator.” TVA joined with the University of Tennessee System (UT) and Oak Ridge National Laboratory (ORNL) in sponsoring the program that will bring 10 start-ups each year for three years to the Knoxville-Oak Ridge region.

Calling it a “deliberate effort to create opportunities,” Lyash also described the vision that he shares with both UT President Randy Boyd and ORNL Director Thomas Zacharia to create a robust innovation district or hub in the region.

“We need to help the world know what a great place this is,” he said, adding, “To foster innovation and entrepreneurship, we must work together” to build the innovation hub.

Noting that three million Americans are employed in advanced energy businesses, Lyash said that “it is a great time to be involved in this sector.” He emphasized the importance of advanced energy technologies in reducing costs, providing greater choice and controls for customers and broader options to stimulate competition, and improving resiliency.

He reiterated on several occasions TVA’s focus on low cost, reliable, resilient, and clean energy, saying at one point, “We have to admit fossil generation as we use it today is not sustainable.”

One of TVA’s core missions is economic development, and Lyash said, “We are creating a competitive advantage for the Tennessee Valley” with the priorities that TVA is adopting. He underscored the point by citing a number of data points including the fact that 67,000 jobs were retained and $9 billion in new capital investment secured across the seven-state TVA region in spite of the COVID-19 pandemic.

Lyash praised the Knoxville Utilities Board, noting that Knoxville is the number one city in the Southeast for solar power investment. He said the local utility is bringing 502 megawatts of solar power online through TVA’s “Green Invest” program and praised the recent decision by KUB to follow Chattanooga’s EPB in deploying broadband to the customers it serves.

“Access to the internet is as important today as is access to electricity and water,” Lyash said.

Another priority for the utility is supporting the State of Tennessee’s goal to be the top state in the country for electric vehicle (EV) production and the corresponding supply chain. As more and more original equipment manufacturers announce plans to increase the percentage of their vehicles that are EVs or go “all-in,” there must be a robust recharging network.

TVA was a founding member of the Electric Highway Coalition which announced this week a doubling of the number of members committed to enabling long distance EV travel through a network of DC fast charging stations connecting major highway systems. Such a ubiquitous network will help consumers feel more comfortable embracing EVs.

During the Q & A session that also featured Amy Henry, TVA’s Director of Transformative Innovation, and Dan Stout, TVA’s Director of Nuclear Technology Innovation, the recent announcement by Kairos Power came up. In case you missed the news, the company said that it will invest $100 million and create 55 jobs to deploy a low-power demonstration reactor at the East Tennessee Technology Park or Heritage Center in Oak Ridge.

“Kairos is in Oak Ridge because of TVA,” Lyash said. As noted in our recent teknovation.biz article, Kairos will build the test or demonstration reactor while partners like TVA will focus on the best way(s) to commercialize the technology.