The first day of the weeklong “Innov865 Week” is in the books with the signature event – “Startup Day” – set for 2 p.m. today, delivered via Lunchpool.

Randy Boyd, the successful entrepreneur and business executive who is now President of the University of Tennessee (UT), kicked-off the festivities with a roughly 10-minute Facebook Live event yesterday morning (click here to view the video). 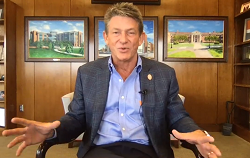 During his brief comments, he highlighted the important role that UT people, both faculty and alumni, had in the success of his third start-up that was launched in 1991 in Knoxville. Named Radio Systems Corporation, the global company known for brands like Invisible Fence®, PetSafe®, ScoopFree®, SportDOG®, and Kurgo® was acquired earlier this year by Clayton, Dubilier & Rice, an international private investment firm.

Boyd said one of the early hires at Radio Systems was a UT engineering graduate. He also praised the support he received from two very prominent UT alumni – Ron Nutt, one of the Co-Founders of CTI Molecular Engineering that was later acquired in 2005 by Siemens, and the late Otto Wheeley, Deputy Chair of the Koppers Company and President of Kopvenco, a venture capital subsidiary of Koppers in the early 1980s.

In the case of Nutt, Boyd said he was an early investor in Radio Systems and made a number of important introductions to other people who helped advance the company. Wheeley became a member of the Radio Systems Board of Directors and later endowed the “B. Otto and Kathleen Wheeley Award” that is given annually by the UT Research Foundation to faculty member, graduate student, medical and/or pharmacy resident, or post-doc who excels in the commercialization of university-based research results.

Boyd also talked about a group of UT engineering faculty members who help significantly improve an earlier version of the technology that was core to the collar dogs wore, reducing its cost by 70 percent.

Later in the day, about 40 people turned-out for the “Spark Innovation Showcase” that cast the spotlight on the six start-ups that have joined the new program operated at the UT Research Park. The session, moderated by Rickey McCallum, was a combination of networking with the representatives of each company followed by a brief “live” presentation by them and a video highlight about their companies.

The participants, in order of their presentation, were:

The presenters are pictured below from screen shots taken yesterday in the order they appeared. McQueen’s is from the video; he was not available for the event.