This Monday’s “News & Notes” wrap-up features a Knoxville Chamber event introducing members to the participants in the “Techstars Industries of the Future Accelerator,” Knoxville’s celebration of a large delegation attending Launch Tennessee’s “Innovation Week,” and a ribbon cutting on The Biz Foundry’s expanded space in Cookeville. 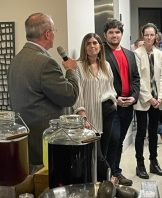 The Knoxville Chamber hosted an event on Thursday night to introduce the 10-start-ups in the inaugural “Techstars Industries of the Future Accelerator” to its members. Held at the TenHats information technology center on Summit Hill Drive, most of the two-hour event was an opportunity for Chamber members to have one-on-one discussions with each of the start-up entrepreneurs. After brief introductory remark by Chamber Board Chair Wes Stowers (pictured on the left in this picture), Tricia Martinez, Managing Director of Techstars Knoxville (middle in picture), offered comments and introduced each of the 10 companies for a brief elevator pitch. As she has at every event where she has spoken, Martinez talked about the “deep tech hub” that Techstars is helping build locally and the importance of the community embracing the companies.

From Nashville but About Knoxville:

Near the end of the reception for legislators and others attending Wednesday’s activities during Launch Tennessee’s “Innovation Week,” Jim Biggs of the Knoxville Entrepreneur Center (KEC) bought a few bottles of champagne to celebrate the robust turnout from the Knoxville 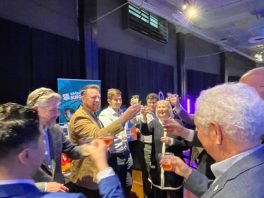 Friday marked Jim Campbell’s final President’s Report at the monthly meeting of the Board of Directors of the East Tennessee Economic Council. The long-time leader of the organization, who is spotlighted in today’s first article in a three-part teknovation.biz series, retires at the end of the month. Campbell focused his final report on a 30-year old document that spotlighted changes needed to ensure the continued relevance of Oak Ridge in the federal ecosystem.