Yesterday’s “Incubatenergy Labs Demo Day” that featured Jesse Thornburg, Chief Executive Officer of Grid Fruit, and nine other entrepreneurs adopted a unique format that might be described as a 360 degree review of each project.

More than 600 people pre-registered for the virtual and mostly pre-recorded session where the entrepreneurs in the second cohort of the utility industry-focused program described their sponsored projects and heard both the sponsor and a representative of the Electric Power Research Institute (EPRI) provide an evaluation.

“Incubatenergy Labs” is a collaborative demonstration initiative coordinated by EPRI with active participation from nearly a dozen electric utilities. It connects start-ups like Grid Fruit, which is also a participant in Cohort 3 of the “Innovation Crossroads” program operated by Oak Ridge National Laboratory, and utilities to address current or future needs the latter have.

In the case of Grid Fruit, its “Incubatenergy Labs” sponsor – Southern California Edison (SCE) – was focused on employing the start-up’s artificial intelligence-based (AI) technology to reduce energy used to power refrigeration units in convenience stores during peak demand times. Managing that time of day is certainly a challenge in California as well as other areas.

“We are trying to manage the 4 to 9 (p.m.) peak, but do it smartly,” said Edwin Hornquist, SCE’s Emerging Technologies Program Manager who worked closely with Thornburg. There are about 12,000 small convenience stores in the state, something Hornquist described as an underserved market. “We want to bring value to both you (the operators) and your customers.”

Unfortunately, as EPRI’s Ammi Amarnath explained, COVID-19 constrained the initial plan to deploy the technology to a handful of stores. Instead, the project was conducted with simulation and modelling. The results suggested a peak reduction in energy use of 4.5 percent.

“The potential is pretty large,” Hornquist said. “The savings are real and potentially scalable to others using (large amounts of) refrigeration,” including large grocery stores with many more refrigeration units. Both he and Amarnath agreed that an important next step is validation of the results through the types of field demonstrations that had been planned. In addition to real data, pilot projects will also help understand any barriers that might adversely impact the savings that have been suggested.

Amarnath outlined what he believed were three next steps: real, live testing followed by an expansion to convenience stores across the country and eventually to expand beyond just peak demand times. 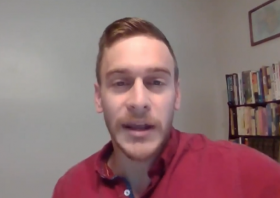 For Thornburg (pictured in this screenshot from yesterday), the SCE work showed benefits of the technology on a new scale. “The reductions translate into $27 million in annual savings across the entire state in small convenience stores only,” he said.

TVA, which supports the “Innovation Crossroads” program, also sponsored a project with LineVision, a start-up that has developed a non-contact, overhead line sensor technology that provides situational awareness and asset health monitoring.

The 10 start-ups that participated in the second edition of “Incubatenergy Labs” were selected from 249 applicants. In addition to Grid Fruit and LineVision, the others were: