As noted in this recent teknovation.biz article, the NEXT entrepreneurial support organization in nearby Greenville, SC has a new Executive Director.

“I’ve been here since September and hit the ground running,” Eric Weissmann told us in a recent interview. “It’s fun; there a lot of promise and a lot of good intentions.”

We had interacted with Weissmann for several years after being introduced to the long-time resident of Cincinnati by John Bruck, our mutual friend. They worked together as part of the Queen City entrepreneurial ecosystem where Weissmann served as Vice President of External Relations for Cintrifuse. That organization’s goal is to make the Greater Cincinnati area the #1 tech start-up hub in the Midwest and among the most attractive innovation hubs in the nation.

Having moved from one vibrant ecosystem to another that regularly ranks near the top in the Southeast, we asked Weissmann to share with us the history of NEXT and his plans for the future. 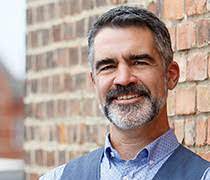 “There was a group of entrepreneurs from the community who participated in a Chamber-sponsored trip about 15 years ago to visit Charleston’s Digital Corridor,” he explained, citing a history of the organization available on the NEXT website. One of the travelers was the late Jeff Papenfus who scribbled this question on a napkin late in the visit: “Why aren’t we doing this in Greenville?”

The answer to the question quickly resulted in the launch of an initiative falling under the Greenville Chamber and its Foundation with two Chamber staffers assigned to lead it – John Moore and Brenda Laasko, the latter Vice President for Small Business and Entrepreneurship. Moore served as President and Chief Executive Officer of NEXT for many years before resigning in mid-2019.

Along the way, NEXT had a significant impact on the entrepreneurial ecosystem in a variety of ways including: (1) seeding the Upstate Carolina Angel Network in 2008; (2) opening three facilities with distinctive missions – NEXT Innovation Center as a co-location facility in 2009, NEXT on Main (2011), and NEXT Manufacturing (2016) – that collectively occupy about 120,000 square feet; (3) seeding Iron Yard, Greenville’s first start-up accelerator in 2011; (4) hosting an annual pitch competition (2016); and (5) collaborating on the NEXT Fellows program to retain graduates of Clemson and Furman Universities (2019).

“Things started to plateau,” Weissmann said with Moore’s departure. “We’re focused on waking it back up.” One key idea that he is bringing to the ecosystem is the “StartupCincy” model that he knows well. “There are a lot of people in the woodwork, and we need to get them engaged.”

That involves everyone from the targeted entrepreneurs that NEXT serves to existing and potential investors, big companies, and the region’s universities. Weissmann laments that Iron Yard was closed in 2017. At the time, the programming school had 15 campuses across the country and more than 100 employees.

“When I ask start-up entrepreneurs what they need the most right now, it’s talent,” he says. “We need an accelerator – something that welcomes in fresh ideas and encourages novel concepts to be fleshed out. We also need a Start-up Weekend. There has not been one in years.”

Weissmann applauds the recently announced “GVL Starts” initiative led by Furman and wants to get Clemson more involved in ways ranging from its technology transfer operation to aspiring student entrepreneurs. In particular, he sees CU-ICAR, officially known as the Clemson University International Center for Automotive Research and located in Greenville, as a key partner, perhaps operating an accelerator.

“Another top priority is expanding our existing corporate partnerships,” he says, citing the history of how Cintrifuse came into existence with strong support led by Procter & Gamble.

In his new hometown, Weissmann notes that Greenville has been very forward thinking and made the shift from textiles to advanced manufacturing faster than many other regions. There’s also a new city marketing campaign with the tagline of “From here, you can change the world.”

He’s inspired by a phrase used frequently by Wendy Lea, the former top executive at Cintrifuse, who always reminded people that they needed to “let go of the wheel to get a better grip.” In Weissmann’s case, he says his goal is to “not just the good news guy, but it’s my responsibility to point out where we have work to do, too. I want to bang the trashcan so that it’s heard from the City of Greenville throughout the 10 counties of the Upstate.”