There was not a whole lot of new information provided late Thursday when Kairos Power held another one of its periodic virtual updates on the $100 million investment that the California-headquartered company is making in Oak Ridge.

As noted in our first teknovation.biz article 23 months ago, the article from the formal announcement in July 2021, and a third article almost a year ago, the project is still on the schedule that was outlined earlier. 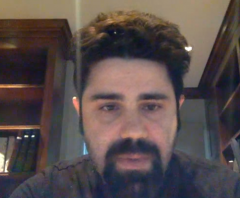 “We have a sense of urgency,” said Mike Laufer, Co-Founder and Chief Executive Officer, who is pictured here from the December 2020 meeting of the East Tennessee Economic Council where he made the first public announcement of the project. The initial timetable called for construction of the Oak Ridge facility to begin in late 2023 or early 2024 and have the demonstration reactor named Hermes operational in 2026 in the East Tennessee Technology Park. That’s still the plan as is Kairos Power’s goal of deploying a commercial scale facility by 2030.

“Nuclear (energy) is not as affordable as it needs to be,” Laufer reminded those attending. “We have a new approach to reducing the cost of nuclear power. We’re building the capabilities to actually deliver real things.”

Laufer said the Alameda, CA-based company, which now has 300 employees, is ready to load salt into the Engineering Test unit in its Albuquerque, NM facility, an important step that precedes the Hermes reactor deployment.

During the one-hour session, Laufer was joined briefly by Third District U.S. Congressman Chuck Fleischmann, a strong proponent of the project, and new Roane County Executive Wade Creswell. After their collective use of about 30 minutes of the program, Laufer answered a number of questions.

On November 16, the Nuclear Regulatory Commission (NRC) is planning to hold a public meeting and an online webinar to present an overview of its preliminary analysis and to receive comments about the Kairos application. The event is set for 7 to 9 p.m. EST at the Hilton DoubleTree Hotel, 215 South Illinois Avenue, Oak Ridge. Additionally, the NRC staff will host an informal discussion at the hotel for one hour prior to the start of the meeting for those attending the meeting in person. No formal comments will be accepted during the informal discussions.

More details about the November 16 session can be found here.