Two separate but fairly complementary initiatives are underway in East Tennessee to try to grow the number of angel investors to further spur investments in local start-ups.

As previously reported, one has a name; it is Chattanooga Cherubs (see recent teknovation.biz article here). The other in Knoxville (see teknovation.biz article here) is offered under the umbrella title of “Opportunities on the Horizon.” Both held their second sessions last week, and we were able to join the Knoxville group in-person and the Chattanooga effort virtually.

The approaches have both similarities and differences, but the goals are the same: increase the number of angels through better awareness of angel investing and education around the topic. As new Chattanooga resident Jay Shaffer said on Thursday about Chattanooga Cherubs, “We want to educate and become an on ramp.” He’s a long-time executive with Sun Microsystems, more recent serial entrepreneur, and member of the Atlanta Technology Angels 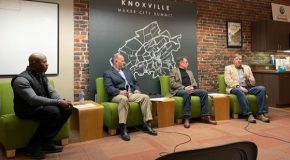 Last week’s Knoxville event continued the cogent advice that we summarized in our teknovation.biz article on article summarizing the January session.