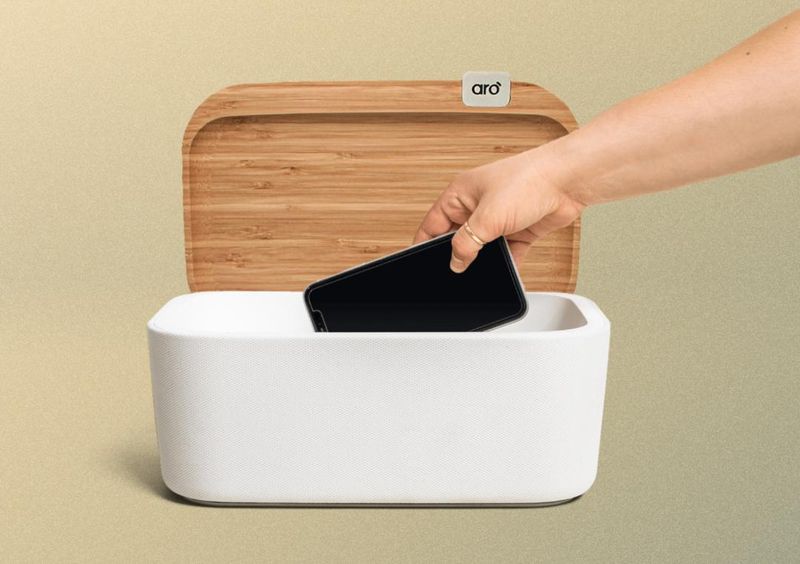 Roughly four months after we published this June teknovation.biz article about Aro, a new Knoxville-based start-up, the team shipped the first 200 units to non-Beta customers in mid-October as priorities now shift from finalizing the product itself to marketing and user testing.

The version that is now in the hands of first adopters is probably version 11 or 12, according to Co-Founder Heath Wilson. For those who have not read our previous article, Aro provides an in-home digital wellbeing solution designed for families. It leverages the science of habit formation and motivational design to ensure parents and kids don’t miss out on what’s most important by helping reclaim time spent on their phones.

For Wilson and Co-Founder Joey Odom, the idea started with a personal need . . . to be more intentional, present and ultimately to spend more quality time with their families without the distraction of their phones. Between them, they have six children.

“We wanted to be better for families and wanted our families to be better. And we knew that if we can do it for our own families, we could do it for others,” Odom says of how the idea began to grow into a full-fledged start-up. He grew-up in Oklahoma, connected with Wilson in Atlanta, and moved to Knoxville about four months ago. Wilson, a University of Tennessee, Knoxville graduate, moved here in 2020.

Along their journey, the two Co-Founders both emphasize that Aro provides something very important for individuals: the opportunity to build a lifestyle of sustainable digital habits. It’s very similar to how a personal trainer helps those who might not be as disciplined ensure that they do their exercising on a regular basis.

“It’s those reminders that nudge us closer to our own intents,” Odom says.

As they have evolved the offering before launching, Wilson says, “We have radically changed our messaging. While the device is so beautiful, it’s now about the solution that combines software and the capabilities of the Aro Home device.”

Aro declares on its webpage that it “gamifies the experience of being off your phone.”

If you’re wondering how it works, you might say it is as easy as 1-2-3 with 4 being the outcome.

Aro is a membership model with a monthly subscription. Members can get started for as little as $18 a month which includes a free Aro Home device. In return, members will have access to a dashboard on their success in going off the grid for a period of time as well as suggestions on what they can do with that time and how they can improve their phone habits. Many of those suggestions will come from artificial intelligence along with stories from real users on how Aro is helping them reclaim time.

“There’s no better way to get the feedback and improve the app than putting it people’s hands,” Wilson says.

The two have self-funded the start-up and are excited about the growth in the Knoxville entrepreneurial ecosystem. “We have a true tech company, and we want to help grow that sector,” Wilson says. “The energy here is really contagious.”

The Co-Founders encourage others to join their mission.