Many career paths that you planned while in college or even earlier have a way of pivoting after graduation, and that was certainly the case with Heath Wilson who describes himself as an “accidental entrepreneur.”

He graduated from the University of Tennessee, Knoxville with a B.S. in Finance in 1997 and spent the next 30 months with a multinational benefits consulting company before launching his first start-up in 2000 while living in Atlanta. That company, which was named eVestment, served the institutional investment marketplace with information, intelligence, and analytics.

“It was in the middle between fintech and data,” Wilson says. “We grew it from four people to 500, more than $100 million in revenue and sold it the in the last part of 2017 to NASDAQ.” He worked for the acquirer for 18 months before deciding to “rest and invest.” He admits this rest period only lasted 45 days before the entrepreneurial itch prompted to him to text his now co-founder, Joey Odom, with another “big idea.” 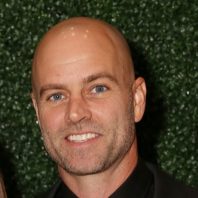 In 2020, Wilson (pictured right) and his family relocated to Knoxville in large measure for lifestyle reasons but also because of the opportunities that he saw in the local entrepreneurial ecosystem. Now, he has joined with soon-to-be Knoxville resident and Co-Founder Joey to launch a new venture that is in its soft launch phase with a full rollout coming this month. Named Aro, it is a platform that makes it easy and rewarding to put down your phone down. Aro combines a smart box that holds and charges your phone with a fun and motivating app that makes it easy to be away from your phone.

The mission, he says, is to “help people experience life, uninterrupted.” Wilson believes it will help families, businesses and organizations, resorts and even schools build a digital muscle and sustainable habits to take breaks from their devices.

Wilson provides a graphic way to think about the new product. Just as a garage is the place where you park your car at night, the Aro smart box is the place where you “park” your mobile phone, hopefully for an extended period to make phone-free time part of an individual’s daily routine. And, just like those who own an electric vehicle that they charge overnight in a garage, the Aro smartbox comes with built-in charging. In the case of Aro, it has wireless and USB charging ports.

“Our phones are amazing and I’m not giving mine up anytime soon. The challenge is that they are really, really hard to put down,” Wilson says. He is quick to say that Aro is “pro phone” and doesn’t believe that shame or guilt leads to sustainable life change.

“The only way to not use your phone is to not have it,” Wilson says. That’s the core concept which he validated again recently when his daughter and several of her teenage friends used the family’s Aro smart box to store their phones while studying for final examinations. They did not want interruptions, instead needing to concentrate on the priority at hand.

As evidenced by the number of people you see at restaurants, ball parks, and even on virtual meetings, putting the phone down for just a few minutes is a real challenge. Just imagine a more extended period, but that is what Wilson and Odom hope will happen. 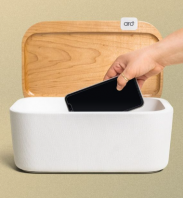 The Aro smartbox (pictured left) is more than just a garage for your mobile device. It also comes with an app that has built-in motivation options, similar to an Apple watch or other fitness devices and apps that offer encouragement as well as real-time data. “We’ve gamified the whole experience of putting down your phone,” Wilson says.

The initial version of the smartbox comes with the capacity for up to four phones. When a phone is added to the box, the Aro app automatically connects with the smart box and tracks the time the individual is away from her/his phone while also recharging the device.

The original smart box sells for $349, and there’s a $9.99 monthly fee for the companion app that tracks “downtime” or “away time.” That data could prove valuable in certain situations.

“We initially started the development as a pure consumer tech product but are now seeing it as a corporate wellness play,” Wilson says. That thinking comes as a result of the negative impact on the mental health of individuals as a result of the COVID-19 pandemic, the “Great Resignation” that is still underway, and the feeling that “you’re always available.”

Noting that “corporations are providing meditation apps for employees,” Wilson believes that rewarding them for actually disengaging and recharging could be of interest to enlightened employers. To do so, the data that the app collects, just like the data that a watch collects during workouts, would be very useful.

Two other potential markets could be the hospitality industry, particularly high-end resorts where the experience they are offering is the escape from the daily grind, and businesses where their conference rooms would be equipped with smartboxes to keep participants focused on the meeting rather than their latest email or tweet.

The mostly self-funded start-up – there was a small angel round last winter – will still be in what Wilson describes as “test and learn mode” as it commercializes the first version of the smart box. “We want to get feedback and see where traction is best gained,” he says.

Aro is currently housed in the University of Tennessee Business Incubator while it awaits completion of new office space.