“LSTCON,” the annual conference of Life Science Tennessee (LST), and the first full day of Launch Tennessee’s (LaunchTN) “Innovation Week” were both held at the Westin Nashville Hotel. The former took place on the first-floor conference space in the hotel, while the LaunchTN activities occurred on the 27th floor.

As you might imagine, I bounced around between the two events as a member of the Board of Directors of both non-profit organizations. LST’s annual “Venture Forum” concluded the formal programming for the day before participants from both events gathered for a reception.

Five start-ups – three from Nashville and two from Memphis – competed for the $10,000 cash prize offered by the Waller law firm and a $1,000 “People’s Choice Award” provided by the University of Tennessee (UT) Research Foundation. The winners were:

The other competitors were: 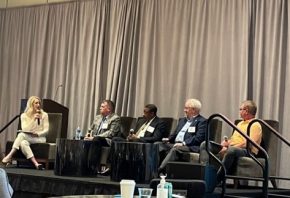 One of the sessions that caught our attention was focused on growing a more robust life science infrastructure across the Volunteer State, and it featured four panelists – two from Memphis (Chris Calabrese, a Vice President at St. Jude Children’s Research Hospital, and Ken Brown, Executive Vice Chancellor at the UT Health Science Center), one from Knoxville (Tom Rogers, President and Chief Executive Officer of the UT Research Park), and an out-of-state individual – Brian Yoor, Chairman and Operating Partner at Portal Innovations LLC – who is exploring Music City as a potential location for his start-up’s new model.

Founded in 2020, the company describes its role as bridging “scientific ideation in life sciences, medtech and bioinformatics through commercial proof of concept by delivering seed capital, specialized equipment and lab space, and management expertise to high-potential early stage companies.”

Yoor spent 23 years at Abbott, the last nearly five as Executive Vice President and Chief Financial Officer. Last month, Chicago-headquartered Portal Innovations announced the launch of the second phase of its operations in the Windy City with the opening of 35,000 square feet of premier wet and dry lab and office space, and Yoor told attendees yesterday that plans for a second facility in partnership with Trammell Crow Company is being planned for Atlanta and Houston.

“I’m not from Tennessee, don’t live in Tennessee, but like Tennessee,” he said in describing the start-up’s business model that includes well-equipped space, seed capital, and mentoring. For Tennessee’s life science sector, Yoor observed that developers like Trammell Crow “want thriving communities and Boston and the Bay Area are saturated.”

He added that those starting life science companies value proximity to universities, medical centers, and amenities like restaurants, entertainment and transportation. “You are seeing these come together in emerging markets,” Yoor said, noting that “Nashville has to be a really fun city.”

His advice to those trying to build a robust life science infrastructure was simple: make it a partnership, not just a win for one university. That is the approach Portal Innovations is taking in the cities where it is either established or planning to add a location. “Dispel the myth that this is just a Vanderbilt or UT project,” Yoor said, adding that those in the Volunteer State might consider exploring “what is the art of the possible through triangulation of the different markets in Tennessee.”

LaunchTN hosted several panel discussions on topics ranging from technology transfer to Version 2 of the “State Small Business Credit Initiative” that will bring $117 million to Tennessee. Final approval of the state’s plan is pending in the U.S Treasury Department. Launch TN also hosted one-on-one sessions that matched Volunteer State entrepreneurs with investors that came from throughout Tennessee and beyond.

Both organizations are hosting events today. For LST, it is “Day on the Hill” where members meet with members of the legislature. Meanwhile, LaunchTN has a day of panel sessions at the Musicians Hall of Fame (see yesterday’s teknovation.biz feature article here for the details).