Hosted by the FoundersForge organization and the Johnson City Doughboys, part of the growing Boyd Sports minor league baseball organization, the event was held at TVA Credit Union Stadium with the start-up Founders “pitching” from the home plate area with those awaiting their turn in the on-deck circle. The baseball analogies continued with one pitch per inning and an introduction for each presenter with the saying, “Let’s play ball.”

There was even a seventh inning stretch with music and an extra inning featuring Jeff Bedard, President and Chief Executive Officer of Crown Laboratories Inc., who described the importance of entrepreneurs understanding their personal “why.” He said, “Don’t give up; never give up. You learn that through the answer to you why.”

Jose Castillo, Co-Founder of Spark Plaza, a local co-working community, served a master of ceremonies. It’s a role that he has perfected through a side gig where Castillo hosts the “NASCAR Trackside Live” stage at NASCAR racing events.

Sylvain Bruni with MyNICU captured first place and the $7,000 cash prize, while Lauren Glass with RPL came in second and was awarded a $3,000 cash prize. Third place – a six-month co-working membership at valued at $1,800 – went to Abraham McIntyre with Sitters Now. Finally, the Crowd Favorite was awarded to Jacob Windle of Adulting Academy.

Here are descriptions about the winners:

Other pitchers, in alphabetical order by last name, were: 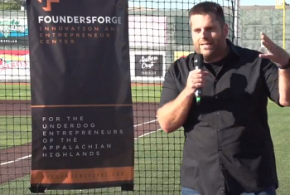 At the beginning last night, David Nelson, Director of FoundersForge, described the entrepreneurial ecosystem he found when he arrived in Johnson City, the effort that he and three colleagues initiated to build FoundersForge that was known in its first incarnation as Startup TriCities, and the result today – 66 known active start-ups.