(EDITOR’S NOTE: This is the final article in a series spotlighting participants in the most recent edition of the Knoxville Entrepreneur Center’s “What’s the Big Idea?” pitch competition.)

“I love cooking. That’s how I bring people together,” says Femeika Elliott, better known to her close friends as simply Meika.

Today, the winner of the 2022 edition of the “What’s the Big Idea?” (WTBI) pitch competition hosted by the Knoxville Entrepreneur Center has two businesses with one operating under the umbrella of the other. The common denominator is healthy, plant-based foods.

Elliott clearly captured the attention of the judges and audience at the early March competition by starting her pitch for The Lotus Program with this question: “Is there anyone more exhausted in this world than a new mother?” Her strong belief is that a healthier eating regime can help new mothers deal with postpartum, a condition that affects 50 percent more Black women that white women. It’s also a condition Elliott knows all too well, having suffered a miscarriage in college and the resulting effects of postpartum.

“The Lotus Program came to me in a dream,” she explained. After waiting awhile, she decided that even though it was a dream, “It was an assignment that I had to do.”

The new initiative operates under the umbrella of her Meik Meals business that provides private dining and catering. That company was one of the first tenants of Real Good Kitchen, the full-service, shared commercial kitchen facility in East Knoxville. 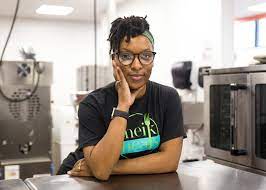 With The Lotus Program, she will be offering an exclusive in-home postpartum chef service tailored to mothers that includes a weekly meal preparation service for a minimum of one quarter post-birth. “Our primary goal in postpartum meal support is to nourish the new mother with healthy, flavorful options so that more of the attention can be on learning the ropes of caring for a newborn,” Elliott explains.

With the $10,000 first prize from the WTBI competition, she can add two part-time post-partum chefs who have specific knowledge of culinary arts as well as the complexities of nourishing expectant parents. It will also allow Elliott to buy a transportation van as well as some additional software and digital content.

The Lotus Program will eventually offer a tiered set of services that includes personal grocery shopping, food education, meal preparation classes, and holistic mindfulness coaching. Whether it’s a 90-minute consultation to simply provide suggestions for addressing postpartum or another level like the regenerate package that provides a full meal service during the week for about $300, Elliott’s goal is to have options for any mother suffering from postpartum.

She did not grow-up here, instead tracing her roots to Louisiana although she lived in a number of cities because her father was in the military. “I’m not a Volunteer (as in Tennessee), but a volunteer,” she says with a smile on her face and an acknowledgement that she is, in fact, an LSU fan.

Elliott’s father was a diabetic, and she says that she had some other health issues over the years, including a few minor ones that she is still experiencing. All of those led her to understand the importance of healthy eating, and it has become her passion.

“Everything I do is with intention,” she said, adding, “I’m going big with The Lotus Program. People have tried to box me in in the past.”

Elliott praised those who mentored her during the WTBI weekend including Booth Andrews, Catherine Porth, Stacy Baugues, and the Harper sisters – Tanika and Deidra.