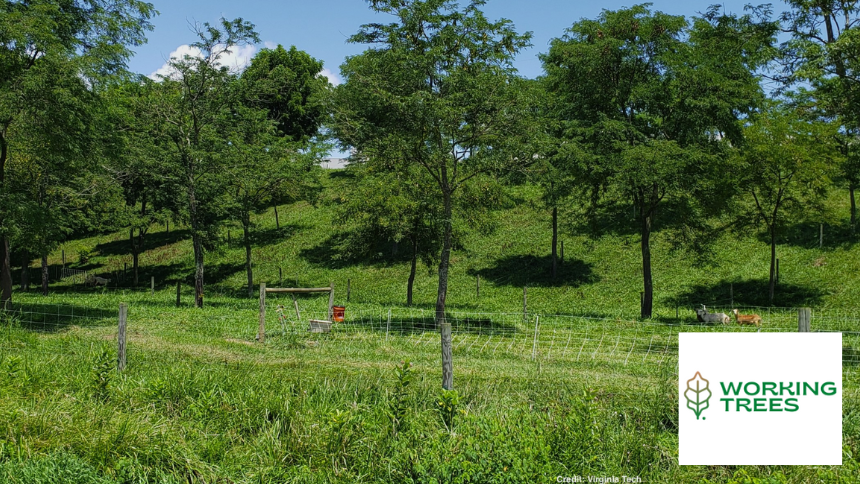 Working Trees helps farmers profit from the carbon in their trees

Working Trees helps farmers more easily access the carbon market, and their first partnership is with a farm in East Tennessee.

Trees do a lot for us. They give us oxygen, shade, fruit, lumber, and many other things, like capturing a lot of carbon.

If that carbon can be measured, it can be sold into the carbon credit market to help farmers make passive income off newly planted trees. That concept isn’t new, but it’s tricky for most landowners to capture without the right technology.

“I knew I wanted to work where climate and rural economic development overlap. I went down the rabbit hole related to natural climate solutions and that’s what became Working Trees,” said founder and Chief Executive Officer John Foye.

He and co-founder and Chief Technology Officer Aakash Ahamed have created technology that uses data collected through a smartphone and satellite imagery to measure and sell carbon stored in trees, particularly on pastures and farmland.

On the farmers’ end, they’ll make money from those carbon credits by adding trees to their land and taking the steps to measure it. It’s a practice called silvopasture, which is the smart integration of trees with pastureland.

To test its model and pilot program, Working Trees has partnered with Lick Skillet Farm in New Market, Tennessee, a Century farm that produces pasture-raised livestock and a leader in climate-smart agriculture.

“We have had quantifiable losses from both heat and drought events within the past five years that impacted our profitability,” said Wyn Miller with Lick Skillet Farm.

That’s the reason the farm is planting trees in their pasture, to increase shade for the animals during the summer months.

“I don’t expect the trees to improve our productivity or profitability directly or on an annual basis since they do incur their own costs,” said Miller. “But if managed correctly, the shade in our pasture should support our operation and provide resilience over time, so that intense weather events will have less impact.”

When Miller connected with Foye, she realized there was another perk to planting trees.

“I mean, if you’re going to put the trees in anyway, if you can make a little bit of income off of them, then why not?” said Miller.

Foye said based on the climate, landscape, and history of what the land used to look like long ago makes “Tennessee rank among the top three states for greatest potential.” Miller, who is also a land management consultant with her business Wyn Miller Land Solutions, knows there’s a gap in Tennessee’s land potential.

“Twenty or 25 years ago tobacco was the primary cash crop for most farmers here,” she said. “And when that went away, that vacuum has never really been filled.”

Tennessee farmers are now looking to more diverse models where their income is not reliant on one major cash crop, and carbon credits can play a part in creating that income diversity.

“There are 70 to 100 million acres in the U.S. alone of previously forested pasture where this could work,” said Foye.

So here’s how it works. First, any farmer or landowner with any size plot of land can sign up for a free land-use analysis through the Working Trees website.

“We’ve had people submit hundreds of thousands of acres for analysis,” said Foye.

If the team finds potential for carbon storage in the land, Working Trees connects landowners with regional experts to advise which trees to plant where.

They’ll then find private and government funding sources to cover the upfront cost of implementing silvopasture. Once planted, the farmer will document the ongoing growth of trees, translating to a steady annual stream of revenue once established.

“Once they’re eligible, the producer can put trees in the ground. And once they are big enough to measure, that’s where a phone app comes into play,” said Foye.

While still in its beginning stages, Foye is excited about how Working Trees can help both landowners and the environment. Miller is happy to be part of the project.

“I think they’re trying to assist farmers who are already wanting to make these infrastructure improvements and being a helping hand for them to step into that carbon market that wouldn’t otherwise be realistically available to them due to the complexity of the market requirements,” said Miller.