Sherry Browder, currently the Reindustrialization Manager for UCOR at the East Tennessee Technology Park and a career environmental management specialist, was awarded the “Muddy Boot Award” for, among other activities, her work to transform the former gaseous diffusion site to an industrial asset in Oak Ridge and Roane County.

Ashley Hartman Saunders, UCOR’s Chief of Staff, was one of two recipients of the “Postma Young Professional Medal” named in honor of Herman Postma, a long-time Director of Oak Ridge National Laboratory. The other recipient was Naomi Asher, Executive Director of the United Way of Anderson County.

The “Postma Medal” was created by ETEC to honor the accomplishments of young professionals who have made an impact and fostered a community culture in the region, a spirit epitomized by Postma during his life. The recognition, however, is about more than outstanding work. It’s about being passionate about the Oak Ridge community.

The “Muddy Boot Award” was started in 1973 by the founders of ETEC, then known as the Roane Anderson Economic Council, to reflect the Manhattan Project founders who worked through adverse conditions to build the community. (Click here for a list of past winners and more information about the award.)

Pictured below are the recipients (left to right) Saunders, Asher and Browder. 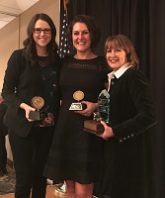