For the second consecutive year, a local company captured both prizes in the pitch competition held during the annual “Startup Day” Knoxville.

Winter Innovations, founded by Lia Winter, was crowned the 2019 “Judge’s Choice” winner as well as the “Crowd Favorite” in the competition yesterday afternoon that drew nearly 300 people to The Mill & Mine on West Depot Avenue. The “Crowd Favorite” award is sponsored by SunTrust Bank.

By winning both prizes, Winter Innovations took home $10,000 to further advance the development of its EasyWhipTM device used for orthopedic reconstruction procedures. During her pitch, Winter told the judges that $10,000 would allow the start-up to secure 1,000 needles which is the minimum needed to begin the 510(k)-clearance process of the U.S. Food and Drug Administration.

If everything goes as planned, the company could begin limited market release in Tennessee in about a year. Winter launched the company while an undergraduate student and has captured numerous student-focused pitch competitions across the U.S. and even in Canada.

Just a year ago, StoragePug, which provides software to support small self-storage operators, captured both awards and went on to report a 300 percent increase in monthly recurring revenue in the next 12 months.

Judges for the competition were Ted Serbinski, Managing Director of Techstars Mobility in Detroit; Richard Dapaah, Venture Partner with FundRX and Knoxville Entrepreneur Center Executive-in-Residence; and Sue Malone, President of Strategies for Small Business who travels each year from San Francisco for this event.

Others who competed in the annual pitch competition were

Here are the sponsors and “Innov865 Alliance” members with Winter after the announcements. 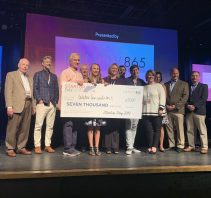