At the Monday night, standing-room-only event, Antonio Tate wowed the judges with his unique product, which attendees tasted at the event, along with floats from Double Cola Co., the title sponsor, and other refreshments. The student team won with their idea for a product named PTS-D0n’t Panic that helps users through panic attacks.

By winning the adult competition, the Tates won $5,000, business consulting, tickets to Launch Tennessee’s “3686 Festival” next year, and two months of free co-working at Society of Work. The STEM school team — Tiffany Lowry, Alexis Webb, LaKayla Jackson, Noah Maynard – won $500 to put toward starting their business, plus business consultations and tickets to next year’s “3686 Festival.”

The winners are pictured here with the adult winner on the left and the student team on the right: 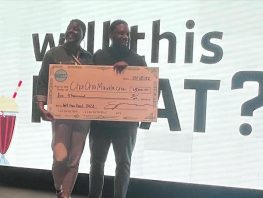 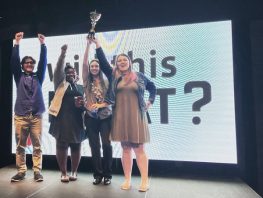