We dropped in on two late Wednesday afternoon events. One was the weekly session of  the new Bunker Labs “Veterans in Residence” (VIR) program, the other was the second session in the Spring Semester edition of the “Vol Court Speaker Series & Pitch Competition” hosted by the Anderson Center for Entrepreneurship and Innovation (ACEI) at the University of Tennessee, Knoxville. 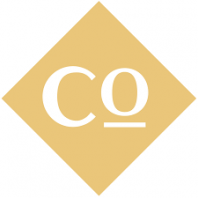 Featured speaker for the latter event was Kris Tatum, Founder and President of Company Distilling, which is expected to open its distillery in Townsend distillery in May and its headquarters and main campus opening in Alcoa in later in 2023. Joining Tatum in the venture are two well-known individuals – Kevin Clayton, Chief Executive Officer of Clayton Homes, and Jeff Arnett, former Master Distiller at Jack Daniels.

What attracted us to the session was the unique title that ACEI Executive Director Lynn Youngs provided: “From Auditor to Distiller.” The two were colleagues years ago at the now defunct Goody’s chain of clothing stores were Tatum was an auditor. He subsequently spent many years in the construction business before being part of a previous distillery.

A native of South Knoxville, Tatum’s best advice to the would-be student entrepreneurs was to always seek the answer to this question: “Why can’t I?” He added, “If you tell me no, you better back it up with why.” 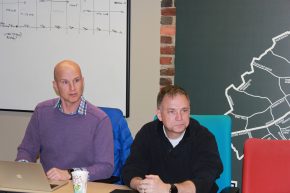 Earlier in the afternoon, we stopped by the Knoxville Entrepreneur Center where nine entrepreneurs are meeting weekly to share their progress in building their start-ups and receiving mentoring from the two VIR program leaders – Tony Lee and Derren Burrell (pictured in that order here). 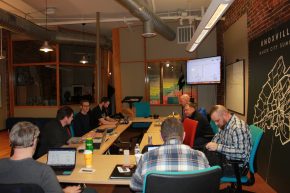 As noted in our feature article when the program was launched in early December, the Knoxville-based chapter of Bunker Labs joined with 21 others from across the country in hosting the six-month incubator to help companies founded by veterans or family members. A total of 750 individuals applied for one of the “22 Alpha” cohorts, and 199 were selected for one of the 22 locations including 11 from East Tennessee. Two of those area companies have dropped out.

We took note that two of the participants in the VIR program that started at 4 p.m. also attended the later “Vol Court” session that began at 5:15 p.m. Nice to see the complementary nature of those separate initiatives that have one thing in common: elevating the local entrepreneurial ecosystem by helping entrepreneurs realize their dreams.