If you’ve ever been a young woman at a college bar, then you know the reality of having a drink spiked. Men, this can happen to you, too. It’s been a problem for years, with no truly easy way to detect if something is in your drink before you take a sip.

Tanner Hawkins has an idea that could change that.

“This is a market that sadly is not going to go away anytime soon,” said, a senior in business management and international business at the University of Tennessee, Knoxville (UTK). “It’s a problem that will always need a solution. I don’t like to monetize victims like that, but at the same time, there will always be people who are victimized by this.”

His pitch is Safe Sip, a straw that will change colors if an additive is detected at any point.

“It would alert the user as well as alert anyone else around them because you can look over the person next to you and see that was a Safe Sip straw and see if it had been activated,” said Hawkins. “That would deter the predator and it would ensure their safety.”

The idea for Safe Sip came to Hawkins on a whim, when he was given a class assignment and tried to think of a problem that hasn’t really been solved yet.

“I was in an entrepreneurship class where we were tasked with developing our own business idea,” he said. “I tossed out this idea for Safe Sip, and they loved it and they ran with it. I got a lot of positive feedback from my professors and colleagues so I ended up going and pursuing this and pitching in Vol Court.”

His product idea hit home with a lot of people, including the judges of Vol Court, an annual speaker series and pitch competition through the Anderson Center for Entrepreneurship and Innovation in the Haslam College of Business.

Hawkins walked away from the Fall 2022 Vol Court Pitch Competition with a third-place win and a $500 check to invest in the creation of Safe Sip. 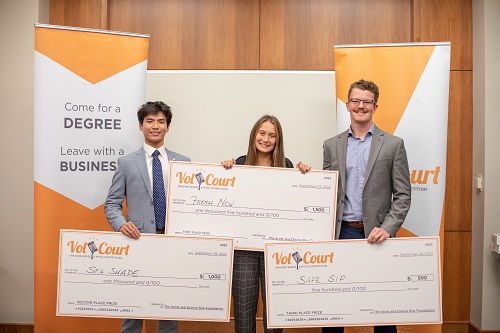 Anthony Do, Taylor Gingrich, and Tanner Hawkins are the Vol Court Fall 2022 winners.

“The thinking wasn’t necessarily behind the money, it was behind the resources and connections you can make along the way,” he said of his decision to be part of Vol Court. “During the four-week process of speakers, they’re all very well-versed, very professional, experienced individuals. So hearing their stories and what they’ve gone through  was very inspiring, like learning about their misfortunes and how they succeeded, how they rebounded, that was really interesting.”

Hawkins, who will graduate in December 2022, thinks his idea was in the top three at Vol Court because of its immediacy.

“Personally, I think it’s because it is such a reoccurring problem. It’s a problem that needs a solution, like, now, and it is a market that will never go away,” he said.

He’ll take his winning money and put it toward research and development to make the idea of Safe Sip come to life.

“Next definitely is reaching out to more people who are engineers, chemists, trying to figure out a way to make his product more cost-effective and get it out into stores,” said Hawkins “Make connections, reaching out to businesses seeing if the bars would even be interested in it.”

As Hawkins continues to apply for jobs, he now knows he’d like to continue calling himself an entrepreneur.

“I have always been afraid of the whole nine-to-five job. That sounds like a prison to me,” he said. “Being able to control what you do, when you do it, how you do it, anything can happen. It’s just really exciting never knowing what’s coming next.”