In the late 1990s and early part of the new century, the clean-up and repurposing of the former K-25 Gaseous Diffusion Plant site in Oak Ridge was viewed as “an impossible endeavor,” Lawrence Young told attendees yesterday at an all-virtual celebration of the mostly completed work.

“I’m quite frankly amazed at where we are now,” said the recently retired President and Chief Executive Officer of the Community Reuse Organization of East Tennessee. While there is some work left to be done, more than 1,000 buildings have been removed and the number of moderate sized sites is down to just three, assuming the proposed airport on the site comes to fruition.

“Don’t underestimate what effort went into this,” Young said, describing the more than 25-year effort as a “super human vision.” 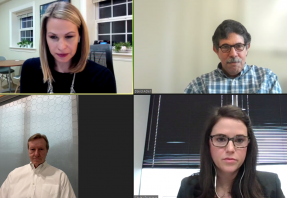 The virtual update was organized by DOE and UCOR which wanted to celebrate the decades-long transformation.

Regular readers of teknovation.biz may recall that one of the large sites that was made available as a result of the clean-up was scooped-up by Kairos Power which officially announced last July that it will invest $100 million and create 55 jobs to deploy a low-power demonstration reactor at the East Tennessee Technology Park or Heritage Center.

Today, the Heritage Center can support new opportunities in green energy as well as nuclear. The site will also house one of the three locations of the Manhattan Project National Historical Park and an environmentally-protected section in conjunction with the Tennessee Wildlife Resources Agency.

Young, who has been involved in economic development in Oak Ridge for decades, drew a comparison between what he was selling in 1995 and what his successor can sell today. In addition to the K-25 site, there were deteriorating facilities and challenged missions at both Oak Ridge National Laboratory (ORNL) and the Y-12 National Security Complex.

Was Oak Ridge going to thrive or wilt?

The story today is much different. There’s the Oak Ridge High School that sent a message with the way it was financed. There are world-class facilities and capabilities at ORNL and Y-12 (Spallation Neutron Source, computing facility, and Uranium Processing Facility to name three), and a vibrant shopping area.

“These reinforce what we have been telling our clients,” Young said.