INVESTOR OUTLOOK PART 3: Health of start-ups in portfolios at the beginning and end of 2020

The event, held at The Foundry on the Fair Site, included recognition of one prolific UT researcher who was cited three times and the naming of two winners for the inaugural “UTRF Innovation Driver” award.

A total of 29 researchers received plaques in recognition of patents that have been issued in the past year, and 12 different researchers were honored for the successful licensing of their inventions to commercial entities. Several other awards were also presented.

Neal Stewart, holder of the Ivan Racheff Chair of Excellence in Plant Molecular Genetics and a Fellow of the American Association for the Advancement of Science, was recognized for two inventions that UTRF has licensed and a patent that was recently awarded. Two of the honors – the patent and one of the licenses – were shared with other faculty.

UTRF Vice President Stacey Patterson said the “UTRF Innovation Driver” award is a way to recognize younger faculty who have submitted their first invention disclosure in the past three years. She explained that it was designed to recognize all of the hard work, drive, enthusiasm and passion that the researchers exhibited.

About 75 people attended the event where keynoter Grady Vanderhoofven, a local venture capitalist, applauded efforts underway at UT, Oak Ridge National Laboratory (ORNL) and elsewhere to help support the innovation efforts of researchers. He called out the formation of the “Innov865 Alliance” and the region’s inaugural “Innov865 Week” as examples of a growing ecosystem.

Without diminishing the importance of the accomplishments of researchers through their individual inventions and the resulting licenses, Vanderhoofven said the growth of the regional ecosystem is “more important than any single innovation.” The former ORNL licensing executive has been involved in the access to capital area for about 15 years, playing key roles in the launch of the Southern Appalachian Fund in 2003 and Meritus Ventures several years later. More recently, Vanderhoofven has launched Three Roots Capital and is a key driver of the new TennesSeed Fund, a proof of concept initiative.

Citing statistics from the National Venture Capital Association and Launch Tennessee, he noted that 85 percent of the capital being invested in Tennessee is going to companies in Middle Tennessee.

“We have had to innovate to create pools of capital to invest in (these and other) innovations,” Vanderhoofven told the attendees.

Pictured below are the inaugural recipients of the “UTRF Innovation Driver” award with Patterson. 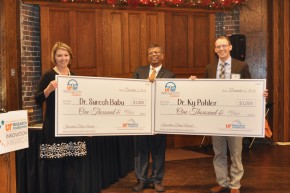