About three dozen individuals – two-thirds of them attending in-person and the balance virtually – participated in a more than five-hour discussion on Wednesday that focused on the role, responsibilities, challenges, and opportunities facing Chief Executive Officers (CEO).

Organized and hosted by the Spark Innovation Center at the University of Tennessee Research Park, the programming was designed to particularly help first-time Founders of start-ups understand the importance of what they must do to be successful, either as the CEO of their company or in finding the right person to fill the leadership role. The title – “Being a CEO or Hiring One” – underscored that theme.

As such, many of those in attendance were current members or alumni of the “Innovation Crossroads” program operated by Oak Ridge National Laboratory or participants in the inaugural cohort of the Spark Innovation Center. There were also a few other locally-based entrepreneurs such as Bruce Ramshaw (CQ Insights), Dan Close (490 BioTech), and John Sorochan, a UT Knoxville Associate Professor and Founder of QuickSod Inc. He is now involved with a start-up currently in stealth mode. 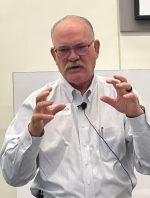 John Bruck, the newly named Director of the Spark Innovation Center, presided over the program that was divided into three components: (1) a discussion of the CEO roles, interspersed with some of Bruck’s lessons learned during his career; (2) a presentation from Angelique Adams that focused on her nearly 25-year career leading innovation at two major corporations and lessons she learned; and (3) a panel moderated by Brandon Bruce, Knoxville’s ubiquitous entrepreneurial champion.

During his roughly 90-minute presentation, Bruck described how he evolved from a corporate guy to the Co-Founder with two others of a Cincinnati-based engineering firm that he ran as Chair and President for 25 years.

“I had the CEO itch,” he explained, but advised those in attendance of two key decisions they must make. “Where you are sitting in your organization is up to you,” but quickly added, “Control is everything as the innovator, entrepreneur, and founder.”

To illustrate those two points, Bruck noted that he was not the CEO. “I did not need one in that company,” he said. On the topic of control, Bruck said the two Co-Founders agreed to his two provisos: he owned 51 percent of the company and all of the voting shares. “I knew I had control forever.”

Bruck’s presentation covered a variety of topics with a good deal of time devoted to establishing a board of directors, making the right selection, communicating effectively and transparently with board members, the difference between leadership and management, and the importance of shared values among stakeholders – employees, board members, and investors.

“Shared values are the most important,” Bruck said. “You absolutely have to get it right. Values are the glue that binds stakeholders together.”

Adams, who spent nearly 21 years with Alcoa and another close to three years as Chief Innovation and R&D Officer with Aperam, followed Bruck. Today, the Knoxville resident heads her own firm – Angelique Adams Media Solutions – and also is an author (first book is titled Women in STEM), speaker, diversity evangelist, and member of several community-focused boards of directors.

“I like to think of people in innovation in three buckets,” Adams told the group. Those buckets include the individual (“yourself,” as she put it), makers (“people who are creating and touching what is unique to your business”), and the ecosystem.

“Innovation takes an ecosystem,” Adams said, reminding attendees of the importance of not only knowing, but also engaging their stakeholders. “When you don’t engage key stakeholders, bad things can happen.”

On the topic of makers, she drew a distinction between what managers do which includes recurring meetings, frequently back-to-back, and what their makers do. Adams said it is important to protect the environment of those doing the innovation work, and that “protecting involves both their space and time. People need time to think,” so she urged CEOs to consider establishing periodic half-day blocks of what she called “Maker Time” for the innovators to do that all-important creative work.

Adams also stressed the importance of celebrating wins, including finding the proverbial silver lining in what might otherwise be considered a disaster. And, like Bruck before her, she reinforced the point that every CEO should consider: “If you are not having fun, it’s time to do something else.”

The event concluded with a panel, moderated by Bruce, that featured five individuals at various stages in their innovation and entrepreneurial careers. They included, in alphabetical order: (1) Coleman Adams, Member Investor in the Clean Energy Venture Group, who also serves on several start-up boards; (2) John Derrick, a multi-time Founder and CEO who recently relocated to Maryville; (3) Bill Malkes, a local serial entrepreneur who is currently CEO of NellOne Therapeutics Inc.; (4) Megan O’Connor, Founder and CEO of Nth Cycle and a graduate of the “Innovation Crossroads” program; and (5) Bob Vanderhoff, a serial CEO and Advisor with InterOcean.